The bigger news here though is the debut of the first-ever Land Cruiser GR Sport.

Despite having already made its world premiere a couple of months back in the Middle East, Toyota actually hasn’t officially unveiled its latest and greatest Land Cruiser in its home market yet. Until today that is, as the Japanese auto giant has finally announced the launch of the 300 Series SUV in all its right-hand drive glory over in Japan. Now while this is certainly welcome news to the East Malaysians who can’t wait to import one of these SUVs over here, there is nevertheless some rather bigger (and more exciting) news to come with the Land Cruiser landing in Japan recently. And that comes in the form of Toyota debuting its first ever Dakar-developed GR Sport variant of this off-roader. Focusing primarily on this newly launched GR Sport variant here first, the most obvious distinction that distinguishes this trim level of 300 Series Land Cruiser from the rest will naturally be its butcher front and rear fascias. Featuring a custom radiator grille and bumper up front, this spec of SUV rather evokes the no-nonsense look of its 80 Series predecessor.

Exclusive too to this GR Sport Land Cruiser are a custom rear bumper with a special rear mudguard and black rocker mouldings, not to mention unique 18-inch grey-painted alloy wheels and black wheel arch extensions to enhance its macho aesthetic. A smattering of special black decals and emblems, as well as black door mirror caps also make an appearance on this off-road ready spec of SUV. Moving on inside meanwhile, the GR Sport Land Cruiser nets some new front seats and a couple of new black and red interior upholstery combinations. Added to the mix too are a custom machined carbon-weave panels within the cabin of this SUV, not to mention a carbon-leather steering wheel and a special start up screen with some custom graphics. It is worth noting at this point though that that while GR Sport may seem like just an aesthetics package over the standard Land Cruiser, there is in fact far more than meets the eye. That is because Toyota has actually also added a couple of rather impressive off-road technologies to this particular variant too, like its exclusive Electronic-Kinetic Dynamic Suspension System (E-KDSS) for instance. An apparent upgrade from the purely mechanical stabiliser adjustment system from the prior iteration Land Cruiser, Toyota will explain (at length) at how this new world’s first electronic setup will ‘automatically and electronically controls each front and rear stabilizer independently, reacting to road conditions and the individual conditions of each of the four wheels to provide more precise stabilization adjustments’. What is however all that is really needed to know about this suspension system though is that it has improved this 4×4’s ‘road-holding performance following jumps at medium to high speeds in undulating sections’. Apart from the fancy suspension, the GR Sport is also the only 300 Series Land Cruiser in the lineup to feature front and rear electronically-locking differentials. This is as opposed to the standard rear Torsen LSD that is available on the rest of the range.

And speaking of the rest of the range, the Japan-spec Land Cruiser is much like what was premiered previously over in the Middle East. More information on which can be found in its prior unveiling linked here, not to mention too the extremely detailed press release below. Just as a brief summary though, the new 300 Series Land Cruiser sits atop a significantly stiffer TNGA-F ladder frame chassis than its predecessors. It is also some 200 kg lighter than the outgoing model too, and features either a 3.5-litre petrol or 3.3-litre diesel twin turbo V6 mated to a 10-speed automatic transmission under the hood.

Turning towards the cabin, this new Land Cruiser nets several new luxury accoutrements like a 12.3-inch central infotainment display, a nanoe X air purifier, a SecurityStart fingerprint ignition system, as well as a host of active and passive driver aids. This latest Toyota SUV however should still be a bonafide off-road machine too, thanks to its Multi Terrain Select drive mode selector and a Multi Terrain Monitor off-road camera system. Supporting lives, livelihoods, and more fulfilling lifestyles all over the world

Launched in August 1951, the Land Cruiser was originally known as the “Toyota BJ,” a four-wheel-drive vehicle equipped with a powerful engine. In the 70 years since, it has sought to deliver safety and security to diverse customers and other people involved with the vehicle.

All over the world, the Land Cruiser has supported lives, livelihoods, and more fulfilling lifestyles, and promised to take people anywhere and everywhere, and come back alive and safe. Now, the Land Cruiser’s essence of “reliability, durability, and off-road performance” has further evolved, based on the actual usage situations of its global customers. A cumulative total of approximately 10.6 million units―and more than 300,000 units a year―are being cherished by customers in 170 countries and regions all over the world. Completely redesigned: Inheritance and evolution, easy to drive and difficult to tire

The new Land Cruiser 300 Series is a complete redesign of the outgoing 200 Series, which launched in 2007. Its development objectives are outlined below

With these objectives in mind, Toyota retained the same frame structure, and allied it with the new GA-F platform, which is based on the TNGA philosophy. The vehicle’s identity has also been reshaped by merging cutting-edge technologies with technologies accumulated over many years.

The new Land Cruiser’s twin development themes of “inheritance and evolution” and “easy to drive and difficult to tire” are reflected in every aspect of the vehicle. An overview is provided below. 1. The GA-F Platform: a refined ride and improved environmental performance 2. A new powertrain: delivering the power and the environmental performance appropriate to the new Land Cruiser 3. Mobility and off-road performance-focused package, and a functionality-focused exterior and interior 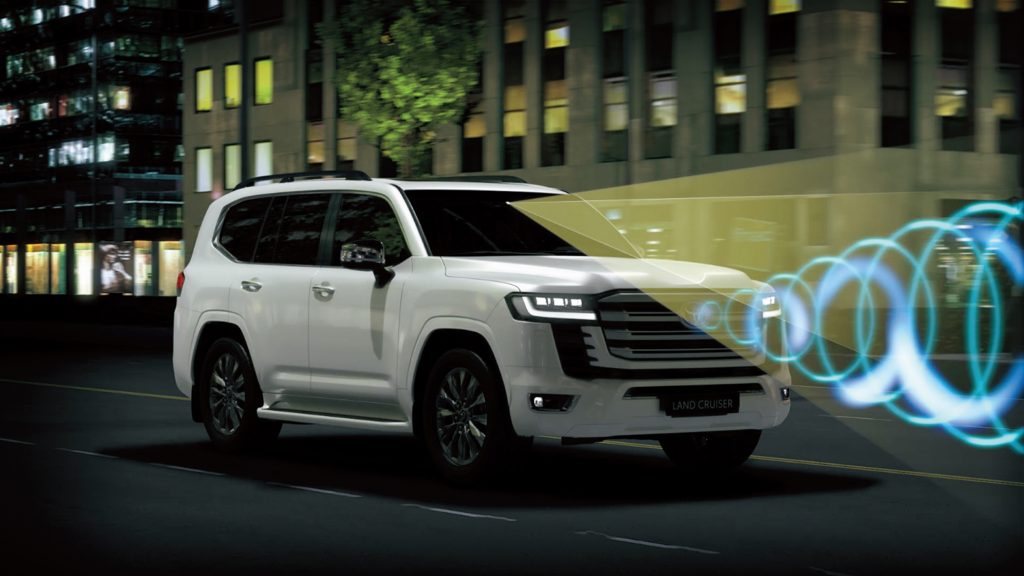 Refined and developed at the Dakar Rally, the world’s toughest race―Improvements requested by participating drivers fed back directly into vehicle development

The Land Cruiser first participated in the Dakar Rally―known as the world’s toughest race―in 1995, and has continued to take part in the production car category in the more than 25 years since then.

For the new 300 Series Land Cruiser―and for the GR Sport model in particular―feedback from drivers participating in the rally was used for vehicle development; the goal was to implement improvements and create a vehicle that was secure, easy to drive, yet difficult to tire in even the harshest driving conditions, and thereby make “ever-better cars” through motorsports.

From the 2023 edition onward, Team Land Cruiser TOYOTA AUTO BODY is planning to participate in the Dakar Rally with an entry based on the 300 Series GR Sport.

By participating in the rally, the development team hopes to further evolve and improve the superb potential of the vehicle, and reflect these improvements in future production cars.