Its sturdy but slow straight-six has been swapped for an LS3 V8 motor that makes 430 hp.  While Land Cruisers

It will surely be a long time coming before any new Land Cruiser models make it over here then.  Thanks The bigger news here though is the debut of the first-ever Land Cruiser GR Sport.  Despite having already made its A look back at how the Land Cruiser evolved over the years into the 4×4 icon it is today.  When This next-gen Land Cruiser has shed some weight and gained a twin-turbo V6. Some 14 years after the 200 Series The next iteration of Toyota Land Cruiser looks to now be even more imposing than the last.  While it is 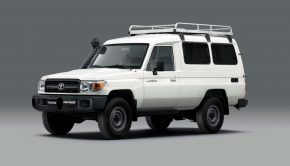 This modified Land Cruiser is in fact the world’s first 4×4 to be certified by WHO for vaccine delivery.  You