Toyota responds to the launch of the new Almera and City by giving the Vios a subtle nip-and-tuck.

With both Nissan and Honda raising the stakes in the compact sedan segment this year, it was only a matter of time before Toyota retaliated with something in their relatively new Vios lineup. And that is exactly what they have launched here today in the form of a mildly facelifted version of its popular B-segment competitor. From the outside, the major news of this facelift will probably be the new front bumper that now gives the Vios a more Camry-esque front end aesthetic. Aside from the new front bumper, this updated compact Japanese sedan also gains new LED headlight clusters which contain within it integrated LED daytime running lights. A vast improvement over the outgoing iteration which has it awkwardly stuck on the bumper. Speaking of the lighting, the new Vios gains LED fog lights too, replacing the old halogen units on the pre-facelift model. New alloy wheel designs also make its way onto the Vios, though that about sums up the exterior changes over the outgoing car. As for the powertrain, all facelifted Vios variants still retain the well-proven 1.5 litre 2NR-FE dual-VVTI naturally aspirated four cylinder. Rated at the same 107 hp and 140 Nm of torque, it is mated to the same 7-speed Continuously Variable Transmission (CVT) which drives the front wheels. Stepping inside, it looks as if nothing much too has been altered from the car that was launched a mere 2 years ago. Dig a little deeper however, and there are actually a host of worthwhile additions that deserve a mention.

For starters, there is a new 7-inch central infotainment touchscreen with integrated Apple CarPlay and Android Auto. A new fabric design also makes an appearance on the variants equipped with fabric upholstery, as are twin 2.1A USB ports with an option for a wireless charger. What is perhaps the most impressive new change in this new Vios though would be the addition of the Toyota Safety Sense (TSS) suite of active driver aids. Bringing along with it Pre-Collision System (PCS), Lane Departure Alert (LDA), 3D Panoramic View Monitor (PVM), Blind Spot Monitor (BSM) with Rear Cross Traffic Alert (RTCA) and a Front Digital Video Recorder (DVR) to this compact Japanese sedan. A Vehicle Telematics System (VTS) is also offered in the Vios. Utiliing GPS/GSM, this system allows for the location of the car to be tracked at all times, which makes it easier for the authorities to recover if one’s Toyota goes missing. Furthermore, this built-in system can also monitor and record vehicle speeds and other operating conditions, with data sent by email to a designated user via mobile app. Before giving too much praise to Toyota however, it is worth noting that these aforementioned features are only available on the higher two trim levels, with the base-spec 1.5 J variant having to do without. Nevertheless, all variants of the Vios still retains its usual suite of passive safety aids, as well as 7 SRS airbags.

Available in five colours, prices for the facelift Vios are surprisingly cheaper than what they retail for currently, starting from RM 74,623 for the base J variant, before rising to RM82,593 for the mid-spec E and RM87,584 for the top-tier G trim level. These prices stated here are with the sales tax exemption in place, and are subject to increase after the 31st of December. For those who desire something sportier for one’s Vios, among the options available is the GR-S sport package which adds a GR-S aerokit, GR Sport grille, suede and leather sports seats and 17-inch alloy wheels wrapped in low profile tires. There is also some performance enhancements too, coming in the form of sports-tuned suspension and a new 10-speed CVT that is mated to the same engine. Prices for this warmed-up Vios is RM 97,500 (inclusive of sales tax).

PRESS RELEASE: UMW Toyota Motor Sdn Bhd (UMWT) is pleased to announce the launch of the New Toyota Vios and New Toyota Yaris. Both models have been received well since their launch in 2019, with more than 40,000 units of the Vios and 20,000 units of the Yaris delivered to customers nationwide.

To refresh and update the two models, cosmetic revisions have been made while to offer the best value for money, many features have been enhanced or added. Safety has also been upgraded with the inclusion of Toyota Safety Sense, in line with Toyota’s aim of bringing down motoring accidents and making roads safer.

As before three variants are available for both models – the 1.5G, 1.5E and 1.5J, all powered by the proven Toyota 1.5-litre engine with a 7-speed CVT.

To refresh the design, Toyota stylists have strengthened visual presence with a new bumper design that is bolder and gives the front a wide stance look. The lighting units on the latest Yaris and Vios are now LED headlamps with LED integrated Daytime Running Lights (DRLs) as well as LED fog lights. Alloy rims with different sizes, depending on the variant, are fitted and have designed oriented towards sportiness.

The interior retains an elegant image with Optitron meters for all variants, except the 1.5J. Optitron meters were first used in Lexus luxury models and have advanced lighting technology for sharpness and clarity under all lighting conditions. The instrument panel includes a 4.2-inch Full Colour Multi Information Display (MID) using a TFT (Thin Film Transistor) screen. Leather upholstery is provided in some variants, creating a more premium image in the cabin. There is also a leather-wrapped steering wheel and gear knob while the instrument panel area has been darkened to complement elegant look. For variants with fabric upholstery, there is a new design on the fabric that is more casual yet elegant. Better connectivity can be enjoyed with the new 7-inch display audio system upgraded with the inclusion of Apple CarPlay & Android Auto-ready (AACP). This enables apps from most smartphones to be mirrored onto the audio system and accessed from the display. Favourite apps such as Waze, Spotify, Google Maps, etc. can therefore be used, expanding the capabilities of the system. Vehicle Telematics System (VTS) is standard for both Vios and Yaris variants except the 1.5J variants are offered as optional. This system uses GPS/GSM to track the location of the car at all times so if it is stolen, recovery by the police can be made easier and more likely. It can also monitor and record vehicle speeds and other operating conditions, with data sent by email to a designated user via mobile app.

Considering today’s active lifestyles where people carry mobile phones and other devices, a number of storage spaces have been provided around the cabin for front and rear occupants. Besides the deep console box between the front seats, there are also cupholders and the spacious door pockets are large enough to take water bottles as well. The cupholders have LED lighting inside, adding a touch of class.

To recharge or power mobile phones, there are two 2.1A USB ports provided as well as a wireless charger [offered on optional basis]. A conventional 12V socket is also available for powering other devices or as an additional recharging point. To further assist the driver, Toyota Safety Sense (TSS) is now offered in all variants except the 1.5J. This system consists of a Pre-Collision System (PCS) and Lane Departure Alert (LDA) which can be switched off if the driver does not require them.

PCS constantly monitors the road ahead and if a vehicle is detected and there is a possibility of a collision, the driver will receive a warning. If no action is taken to reduce speed, the brakes will be automatically activated to reduce the risk of a collision.

With LDA, when the car deviates from its lane unintentionally, an alert is shown on Multi Information Display (MID) with an accompanying buzzer sound. This will prompt the driver to take corrective action to bring the car back into its correct position in the lane. Other features added to the new Yaris and Vios are an Emergency Stop Signal (ESS) system that automatically activates during emergency braking, and a Rear Seatbelt Reminder to help ensure that rear passengers abide by the law. An ISOFIX point with a tether anchor is also provided for installing a compatible child seat, also required by law for small children (since the beginning of 2020).

Wits its energy-absorbing, high-strength body structure, the latest Vios and Yaris are rated the maximum of 5 stars by ASEAN NCAP. Standard features across the range include 7 SRS airbags and Vehicle Stability Control (VSC). Additionally, all the variants also come with ABS and Electronic Brakeforce Distribution (EBD) as well as Brake Assist (BA). Hill-start Assist Control (HAC) is also a standard feature and helps in preventing the car from rolling backwards when moving off on a steep slope.

Also new is the Panoramic View Monitor (PVM) system has been upgraded from 2D to 3D type. This is supplemented by a rear view camera and parking sensors. There are also Blind Spot Monitor (BSM) and Rear Cross-Traffic alert (RCTA) systems, increasing driver awareness of other vehicles in the surroundings. The Aerokit offered as optional, enhances the looks of the car and the latest kit has a restyled front bumper to match the new looks. While a front Digital Video Recorder (DVR) is installed as standard for the Vios & Yaris except the 1.5J variants, there is also the option of adding a rear DVR. All items are installed at UMWT’s own accessory centre adjacent to the plant. Installation is professionally done and proper colour-matching is assured. The new Yaris and Vios are now available for viewing, testing and purchase at the showrooms of all Toyota dealerships and UMWT branches nationwide. For more information, the public can visit Toyota.com.my or call the Toyota freephone line 1-800-8-TOYOTA (869682). 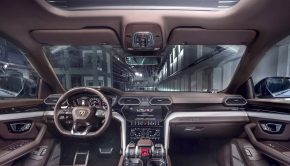