Alfa Romeo Giulia Gets Only A Facelift After 7 Years

There is a ‘new’ Giulia making its debut. Well, its not all new, just a facelift and it arrives 7

This Tundra face transplant kit may just be the thing to up the aggressiveness to anyone’s Hilux.  When it comes

Edaran Tan Chong Motor (ETCM), distributor and importer of Nissan vehicles for over 60 years has finally revealed the all-new Jaguar F-Pace facelift has been officially launched in Malaysia

Jaguar Land Rover Malaysia has revealed the facelift of the Jaguar F-Pace in Malaysia. The SUV has been refreshed with

Jaguar Land Rover Malaysia have just launched the new Jaguar XF with a refreshed design and interior. This new model

Suzuki’s Little Jimny Nets The Tiniest Of Updates For 2021

A tiny set of tiny mid-life refreshes has made its way to the larger-than-life Jimny.  While Malaysians are still to 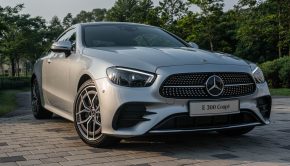