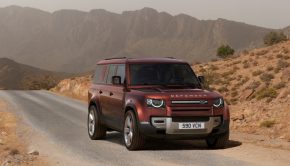 The Land Rover Defender has been incredibly successful since its launch. Even at such a premium price ranging from RM799K A Ford Bronco copy is coming from China under Jetour

In 2018, Chinese company, Chery Automobile launched a new brand called Jetour. Since then, Jetour has been releasing large SUVs Buyers continue to come in for the new Land Rover Defender

The Land Rover Defender has always been a flagship model for the brand. After a widely anticipated launch of the 2020 Defender Has PIVI Pro And More To Challenge Rivals The latest 007 movie, No Time To Die has a 1990’s Toyota Prado showing its ability in all conditions. So, Defender demand was rising fast a decade ago and now there is a sudden slow down and price drop. There

Land Rover is preparing its audience and not only for the premiere of the film ‘No Time To Die;, which Wearnes Automotive Pte. Ltd. who is the brand guardian for Jaguar cars and also Land Rover has just given Singaporeans