Buyers continue to come in for the new Land Rover Defender

The Land Rover Defender has always been a flagship model for the brand. After a widely anticipated launch of the new Defender last year, Land Rover are still continuing to get buyers for the car. It should be noted that the new Defender is not cheaper, with prices ranging from RM799K up to RM999K. When it comes to offroad travel, nothing beats the Defender. The Defender is capable of driving across the harshest of terrains with its Terrain Response system. Its intelligent Terrain Response is able to recognize driving surfaces and configure the vehicle with the help of a 3D Surround Camera that has a 360-degree overhead view of the vehicle. The new Defender has a strong build with its lightweight aluminum D7x body and Land Rover’s most rigid monocoque chassis. Its boot space starts off at 1,075 liters, but after folding down the 40-20-40 back seats it rises to 2,380 liters. With its strong build, the Defender is capable of withstanding 300kg roof load as well as a 3,500kg towing capacity. With its Electronic Air Suspension, the Defender can tackle 45-degree side slopes and inclines with ease. The built-in Wade Sensing feature allows the Defender to reach a wading depth of 35.4-inch.

Aside from it’s large variety of off-road features, the Defender still has an award-winning PIVI Pro System inside. The PIVI Pro system allows drivers to make use of the Software-Over-The-Air (SOTA) which updates the vehicle without having to visit a Land Rover retailer. With its 12.3-inch touchscreen display, drivers can use the up-to-date navigation system which has optimized routing that has Smart Voice Guidance designed to listen to drivers instructions. The Land Rover InControl Remote technology also allows owners to monitor the vehicles location, fuel level, lock and unlock the vehicle from afar. 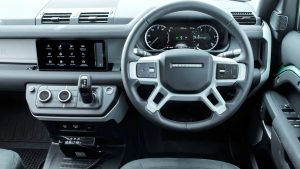 The Land Rover Defender has been one of the Land Rover’s best-selling models last year. Jaguar Land Rover (JLR) reported that the Defender was the only model that grew in sales last year whilst their total sales plummeted. With sales still rising to this day, the new Defender is set to be their best selling product It is currently sold out with the waiting list growing every day.