The special edition of the highly popular crossover vehicle is a ground-breaking collaboration with renowned engineering company Giken Co. Ltd. and Mr Masahiko “Jack” Kobayashi. Mr Kobayashi is the former Chief Designer (Head of Global Advanced Design Studio) at Subaru Corporation and was responsible for the exterior design of more than 12 Subaru production models, including the legendary WRX STI. 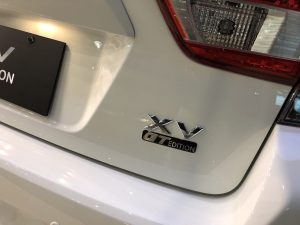 The special edition XV aero kit has four well-made and integrated elements, which give the already sporty XV a sleeker and even sportier look:

These will be complemented by a set of 17-inch bespoke alloy wheels. It also boasts its own carpets and seat-leather design inspired by the cabins of high-performance grand tourers from Germany and Britain. Completing the equipment package of the Subaru XV GT Edition is a dual side view monitor system, which enables drivers to park and manoeuvre with ease. 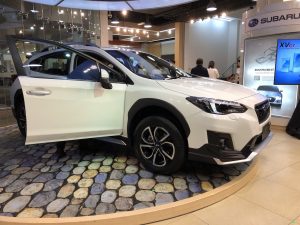 Mr. Kobayashi originally trained and practiced as a fashion designer in Tokyo before graduating with a degree in Transportation Design. In a 25-year career with Subaru, he was known as the ‘hit maker’, after designing numerous successful models, including the original Outback, which was the world’s first sports-utility wagon, several generations of the Legacy and Impreza, the current WRX and WRX STI sports saloons, the Levorg sports tourer and the first-generation XV. He is now an independent designer. Giken is an award-winning engineering company founded in 1964. Holding numerous patents in Japan, South Korea and the United States, it has established itself as an industry leader in the design and manufacturing of technological and material handling systems. Giken is a global supplier of aero-parts and other passenger car components to Subaru and other major Japanese car brands.

Be the first to catch the Subaru XV GT Edition from today at the Subaru Petaling Jaya Showroom and at all Subaru showrooms in Malaysia from 16 May 2019.

TC Subaru Sdn. Bhd. will also be taking advance bookings at the end of the month for the fifth-generation Subaru Forester. The car, which will be launched in Malaysia in July, received record bookings in Thailand since it was introduced at the Thai International Motor Expo in December 2018 and the Bangkok International Motor Show in March 2019. It is the first completely knocked-down (CKD) model to be assembled at the newly launched Tan Chong Subaru Automotive (Thailand) plant.

The first 50 customers in Malaysia to book the all-new Subaru Forester will be given an all-expenses paid trip to Bangkok in December to visit the plant. Customers will get an exclusive look at the high-performance robotics used to ensure superior quality and zero defects at the plant. One unique feature of the plant is a test track specially built to assess the condition of every car before the cars leave the factory. The robust quality control procedures ensure that every car produced at the plant is safe, comfortable and reliable.