Lamborghini Celebrates The Design Of Its Iconic Countach

Could this also be Lamborghini telling us something about its future electrification ambitions though?

The origin of the supercar genre may (widely believed to) have began with the Miura, but it is fair to say that the origin of what is Lamborghini today could be argued to have begun instead from the Countach. Such is simply because all raging bulls of today stem from the angular aesthetics of that 70s supercar. And this isn’t just some idle independent thought either, as Lamborghini themselves have long since proudly admitted to this fact that the Countach has shaped all subsequent models within its lineup till this very day. The most recent reaffirmation coming in the form of this short press release seen below, which goes into surprising detail about how this 70s automotive icon had came to shape the raging bull’s design identity even nearly half a century after it was first unveiled. A somewhat stirring read for those who have a bit more time to spare, what is probably the more surprising (or to put it more aptly, intriguing) thing about this press statement recently released by Lamborghini will be the timing of it all. Not least because the Italian automaker is currently actively trying to be snapped up by someone else despite its current German parents emphatically saying no already, but more perhaps due to the raging bull having also recently announced its electrification trajectory for the coming years.

Dubbed the ‘Direzione Cor Tauri’, there have been considerable chatter across the automotive sphere on how exactly Lamborghini is to adapt to this greener, cleaner future ahead. Particularly in how the automaker will attempt to distinguish itself from its sister brands like Porsche and Audi, for which the raging bull is most likely to share its architectures with when its first all-electric model arrives in the latter half of this decade. So if taking it at face value, this recently released statement from the Italian automaker could be just another marketing ploy to draw some more attention to the brand by getting some pretty pictures of the Countach circulating in the media-sphere. Then again though, this most recent reminder by Lamborghini regarding the fact that it still remembers its (wild design) heritage could be also interpreted as a not-too-subtle hint to all those skeptical of its electrified future that the company won’t be losing its mad, bad roots just yet, despite ditching its petrol drinking habit moving forward. PRESS RELEASE: The distinctively contemporary lines of the Lamborghini Countach, a legendary model celebrating its 50th anniversary this year, shaped the design of all subsequent Lamborghinis even up to today’s models, including the Aventador, Huracán, Sián, as well as the Urus.

“There are works of art that always remain relevant, and the form of the Countach is one of them.” These are the words that Mitja Borkert, Head of Design at Lamborghini, uses to describe the style of this automotive icon. “Its design,” adds Borkert, “is comprised of perfect proportions, characterized by a very pure and essential approach. Its distinctive feature is the single longitudinal line that visually connects the front and rear parts. From a stylistic point of view, it’s a perfect inspiration because, even when the rest is modified, the line is an element of visual continuity between past and present. It’s the epitome of the DNA in all Lamborghini design, the tradition of the stylistic language from the origins to the present day.” Low and wide, the front view of the Countach is characterized by diagonal lines on the hood, which are also repeated on the engine compartment, making it immediately recognizable even from a distance. The shape of the passenger compartment, low and squared, combined with the typical slope of the windscreen, influenced the design of the various models that have followed the Countach. It is precisely these shapes that have remained unchanged over the years, along with the particular and characteristic cut of the side windows, which make a Lamborghini easily identifiable at first glance. The Countach introduced a futuristic style ahead of its time during the 1970s, an era of explosive creativity and one of the most significant moments for design. These were years of important social achievements, which are reflected in significant changes that would inspire designers and creatives around the world. The space race; the advent of high tech with the development of modern computers; the trends in fashion linked to geometric patterns, extravagant choices and the explosion of bright colors; the advent of individualism and the Jet Age; are all elements that influenced the stylistic choices of the Countach’s designer, Marcello Gandini. The Countach is also due to the vision of Ferruccio Lamborghini, who believed right from the start in the revolutionary project, that today is still influencing the style of future Lamborghini models. 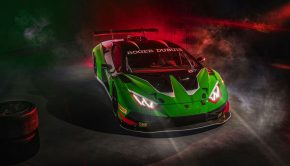