Mercedes-Benz Malaysia has just launched the all-new C-Class. The new sedan comes in two variants, the C200 Avantgarde Line and 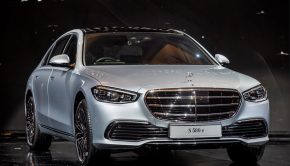 Mercedes-Benz Malaysia has recently announced the new Mercedes-Benz S 580 e plug-in hybrid. This is following the successful launch of

Aston Martin DBX ‘The One Edition’ is released in Malaysia

Aston Martin Kuala Lumpur has recently unveiled the new Aston Martin DBX ‘The One Edition’. The standard DBX was first