This all new Innova will arrive in Malaysia probably first quarter of 2023.

The all new next generation Toyota Innova family vehicle carries the name Zenix in Indonesia.

Launched this week, this all new Toyota Innova is based on the TNGA-C modular platform instead of the ladder-frame chassis which means it is essentially sitting on a large Toyota sedan platform.

The TNGA platform is used on sedans and also SUV’s like the Highlander which is not sold in Malaysia and the RAV4 SUV which was launched 3 years ago. This latest Innova will now deliver class best comfort and features that will have no price point rivals in Malaysia. Since Honda discontinued the Stream MPV (which sits on a sedan platform) and the Mazda Biante MPV, the Innova has been alone in its segment.

Now, with this latest Innova, we will see even more buyer interest coming from buyers who were looking for a family vehicle that is larger than a Corolla Cross.

Despite being a MPV from the first model decades ago, this latest Innova will now be pushed into a new segment, SUV. Well, it is no longer on a ladder frame, no longer rear wheel drive and instead will have SUV like features, so this could be Toyota’s model to compete head on with the X-Trail.

Interestingly, the front design of the new Toyota Innova is heavily inspired from the popular Corolla Cross, featuring a larger hexagonal-shaped front grille finished in contrast black with chrome treatment.

It comes with wrap-around LED projector headlamps with a new set of daytime running lamps at the top edge just like with the popular Toyota Veloz.

This new Toyota Innova comes with an all-new feature-loaded cabin. It comes with a layered dashboard with dual-tone brown and black scheme. The central console is dominated by a large free-standing touchscreen infotainment system with smartphone connectivity.

The new model gets dual-tone leatherette seats and chrome treatment on door panels. It gets digital instrument console and a 3-spoke multi-functional steering wheel. This new model will be powered by the familiar 2.0L petrol powered engine with hybrid technology to deliver lower emissions and better fuel consumption. With 194hp, this 2.0L four-cylinder engine, with two electric motors will deliver an estimated 37 combined mpg.

Like the Corolla Cross, there will be a standard 2.0L and also a hybrid version offered in Malaysian showrooms. 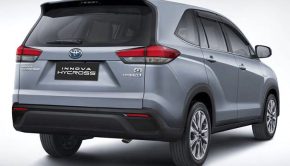