Have You Forgotten About The V10 Subaru Impreza WRX

The Subaru Impreza WRX is a globally recognised sports sedan.

Yes, this brand is known for one particular model around the globe, Impreza. This sports ‘sedan’ has been a much sought after ‘sedan’ since the first model appeared in Subaru showrooms sometime in 1992.

Now most of you would think that the very first Impreza arrived just as a ‘sedan’, but you would be wrong. Subaru actually released a WRX wagon as well. Sadly, the wagon was not popular in our part of the world and we never saw it in Malaysian showrooms. Then in the year 2000 another WRX wagon was released and even this was not made popular. In 2003, the WRX wagon was given a mild makeover and it did arrive via private importers in very small number to Malaysia. In early 2008 a new Subaru Impreza (also known as the Version 10) was launched and Subaru product planners decided that only a hatchback will be released. Shocking the die-hard fans, it was hard to swallow in the beginning and soon after fans realized it was still a WRX and was not missing anything but a large boot. Then in October 2008, to commemorate the 20th anniversary of ‘STI’ some 300 units of a very special version were released. Visually, it looked identical with the normal Impreza WRX except for a few differences like the 18 inch STI wheels wrapped in 245/40/R18 tyres, black rear spoiler, front bumper lip and STI 20th Anniversary emblem.

No changes were made to the engine but upgrades were added for handling like STI pillow ball bushes on rear suspension arms / linkages, STI tuned suspension, STI strut bar and STI front lower arm bar.

The changes on the interior started with front bucket seats with red sticking and embroidered STI logo, STI leather wrapped shift knob, STI 20th anniversary aluminium side sill plate and ended with a STI engine start stop switch. Overall, 10kg was added to the car, giving it a final weight of just 1480kg. For the following year in February 2009, Subaru had introduced a new variant for this new generation Impreza WRX STI. Using a different chassis code, it was known as the GRF Subaru Impreza WRX STI A-Line.

Power output was reduced to 300hp with 350Nm of torque and Driver Controlled Center Differential (DCCD) electromechanical differential was also removed but replaced by another system known as VTD-AWD for this automatic transmission.

The brakes were also downgraded to two piston calipers up front and single caliper at rear but it is possible to add back the Brembo brakes as optional equipment. Leather seats with an electric powered driver seat was included for the A-Line. The A-Line also gained weight, about 10kg to become 1490kg. Few months later in July 2009, Subaru released the Subaru Impreza WRX STI Spec C. As the name suggested, the concept of this Spec C remained the same as before, a lightweight performance enhanced model. The exterior of the Spec C was almost the same as the normal GRB Impreza WRX STI except that it did not have fog lamps, Brembo brake calipers painted in gold and the wheels were changed to lightweight aluminium wheels with the same tyre size.

Weight reducing measures started with a lighter battery, new aluminium hood, lightweight glass for windows and the removal of the spare tyre. The engine upgrades would be a ball bearing turbocharger, different ECU, intercooler water spray and revised throttle response.

Official engine output was listed as the same at 304hp with 422Nm of torque. For handling, the chassis was stiffened at the front suspension mount, suspension settings revised and a rear mechanical LSD was added. The seat material was changed to alcantara with red stitching.

The Spec C was now lighter by 30kg, at 1450kg although there was also a further stripped variant with 17 inch wheels that weighed in at just 1430kg.

In January 2010, a special variant of the Subaru Impreza WRX STI A-Line was introduced. It was known as the A-Line Type S. Externally, it remained the same as the A-Line except that it was equipped with the 18 inch lightweight aluminium wheels that was used for the Spec C. Since the arrival of this 2008 WRX model, Subaru has not released a wagon or hatchback version of the WRX.

So, how much will it cost to buy this rather special yet under-appreciated Subaru today in our used market? Well, we have seen price start from RM55,000 to as high as RM120,000 depending on the specification and the model year. This is a large price difference and makes picking the right used model a little difficult for the person who has little knowledge about Subaru’s.

Well, it will not rise to silly levels of the Subaru Impreza 22B STi which recently sold for RM1.3 Million, but it will not drop in value like the family friendly Forester Wagon.

Its launch price in Malaysia via Motor Image in November 2008 was a hefty RM298,000 which was higher than some established European models.

Here are our two cents. For the first time Subaru buyer, look at the base 2.0L version and get to know this Boxer powered all wheel drive vehicle. For the die-hard enthusiasts, the decision is purely from experience. 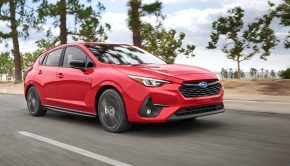