Porsche has begun testing for their LMDh prototype that plans to fight for victory in the upcoming endurance races including the Le Mans, Daytona and Sebring. The vehicle is to be fielded in the FIA World Endurance Championship (WEC) and the North American IMSA WeatherTech SportsCar Championship under the Porsche Penske Motorsport team.

The intensive testing program for the prototype has just started. The Porsche LMDh prototype has been confirmed to have a large-capacity twin-turbo V8 mill with a standard hybrid system. This hybrid drive system is capable of outputting up to 680PS while also being environmentally friendly with significant reduction in C02 emissions. “We were spoiled for choice with the engine for our LMDh prototype, because the product range offers several promising baseline units,” explains Thomas Laudenbach, Vice President Porsche Motorsport. “We decided on the V8-biturbo, which we feel offers the best combination of performance characteristics, weight and costs. The kick-off to the active test programme was an important step for the project.”

Components for the hybrid drive in the LMDh include storage and delivery of electrical energy supplied by Williams Advanced Engineering batteries, motor-generator unit and control electronics from Bosch and transmission from Xtrac. 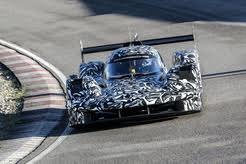 The Porsche LMDh will premiere in the opening round of the IMSA series in January 2023. The engine regulations for the LMDh vehicle class allow a great deal of freedom in terms of displacement, design and number of cylinders. The maximum engine speed allowed is 10,000 rpm and the pass-by noise measurement capped at 110 decibels. 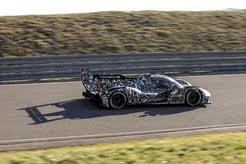 The engine must weigh a minimum of 180 kilograms, including the air supply and exhaust system as well as the peripheral cooling components. Depending on the Balance of Performance (BOP) adjustments, the maximum output is said to be between 480-520kW (653 to 707PS). In racing conditions, the combined power output of the combustion engine and hybrid drive totals to 500 kW (680 PS) at the half-shafts.