This new Cadillac LMDh competitor will also be competing in IMSA during that time.

While the 2021 24 hours of Le Mans has only recently wrapped up with Toyota taking the overall crown yet again, there has nevertheless been much talk already about what is to come in its future. And the biggest news of which that broke recently regarding this particular subject comes from Cadillac, who has just announced that it will be throwing its hat into the ring in competing for glory at the top-flight Le Mans Daytona Hybrid (LMDh) class during 2023 round of this iconic endurance race. Following on from the likes of Porsche, Audi, Acura and BMW, the American automaker is currently the fifth confirmed entry to be competing in the newly-formed LMDh category for the 2023 World Endurance Championship (WEC). Going by the Daytona in its class name too, it shouldn’t therefore be all that surprising to hear that Cadillac will be fielding a twin-programme to compete in the U.S.-based IMSA series during that time as well.

In fact, Cadillac is currently planning to debut its new race car at the Rolex 24 Hours of Daytona in January 2023. A race which it has incidentally won four times in a row from 2018, with its two-time championship-winning DPi-V.R IMSA challenger. Now discussing about the technical specs of its 2023 LMDh-V.R meanwhile, this fourth-generation Cadillac V-Series prototype will be based upon a standardised chassis obtained from its constructors partner Dallara. Conforming to LMDh regulations too, this American racer will feature a custom combustion engine but pack a spec hybrid powertrain system.

Automakers are however free to go wild on the bodywork, hence the reason why this race car features some mad aerodynamic elements in the sole rear three-quarter rendering provided. What is less mad though are people responsible for Cadillac’s campaign, as the American automaker’s LMDh program in 2023 will be run by experienced racing teams in the form of both Chip Ganassi Racing and Action Express Racing. “For nearly 20 years, Cadillac V-Series has brought winning technologies from the racetrack to our performance cars on the road,” said Rory Harvey, global vice president, Cadillac. “We look forward to continuing that heritage by competing in this exciting new chapter at the highest level of international motorsport,” he added. PRESS RELEASE: Cadillac today announced it will compete in the IMSA WeatherTech SportsCar Championship and Automobile Club de l’Ouest (ACO) LMDh category in 2023 with a fourth-generation Cadillac V-Series prototype. Cadillac and its partners will bring their considerable experience from American endurance racing to compete for overall victory in the 24 Hours of Le Mans.

“For nearly 20 years, Cadillac V-Series has brought winning technologies from the racetrack to our performance cars on the road,” said Rory Harvey, global vice president, Cadillac. “We look forward to continuing that heritage by competing in this exciting new chapter at the highest level of international motorsport.”

The new Cadillac LMDh-V.R prototype is designed to conform to IMSA and ACO Le Mans Daytona hybrid specifications for the new top tier of endurance racing that replaces the current DPi class. As with the other competitors in the series, it will be based on a standardized chassis and incorporate the spec hybrid powertrain system, but will feature a unique combustion engine and distinctive bodywork.

As with the Cadillac DPi-V.R, the Cadillac LMDh-V.R will be a partnership between GM Design and the constructor Dallara. A new Cadillac engine package will work in conjunction with the LMDh common hybrid system.

Cadillac’s program will partner with Chip Ganassi Racing and Action Express Racing. The Cadillac LMDh will debut on the track for the first time at the Rolex 24 Hours at Daytona in January 2023.

“The IMSA LMDh category is looking to be very competitive with multiple manufacturers,” said Gary Nelson, AXR team manager. “We’ve had a lot of success running the Cadillac DPi-V.R as one of the original teams since 2017, and we are looking forward to being a part of the next chapter of Cadillac Racing.”

Recent Cadillac Racing achievements with the Cadillac DPi-V.R include:

Cadillac’s commitment to performance is embodied in the V-Series portfolio. Its recent expansion includes the CT4-V and CT5-V sport sedans, as well as the track-capable CT4-V Blackwing and CT5-V Blackwing.

“We have combined thoughtful technology and luxury with a driving experience that’s clearly V-Series,” said Brandon Vivian, executive chief engineer, Cadillac. “By incorporating the technologies and expertise learned on the track, Cadillac V-Series continues to build incredible performance vehicles for the road with zero compromises.” 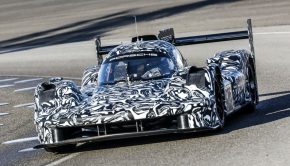