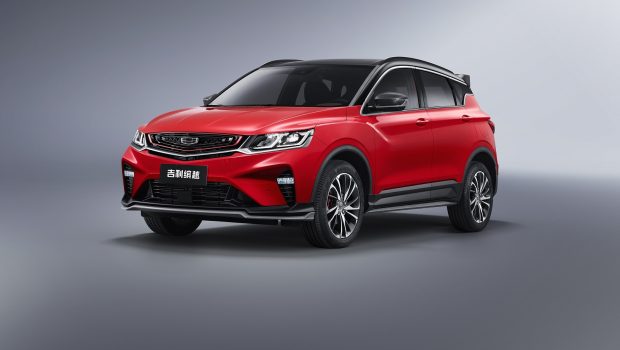 This is the Geely Bin Yue renamed ‘Coolray Sport’ for the Philippines market and it will soon be the Proton X50 in Malaysia. The Coolray made its global debut in late 2018. It is part of Geely’s new global lineup which is highlighted by its “expanding cosmos” grill, a feature present in every modern Geely vehicle since 2012.

The Geely Coolray measures 4,330 mm long, 1,800 mm wide, 1,609 mm tall, with a 2,600 mm wheelbase and is built on Geely’s BMA platform which, according to Geely engineers, optimizes interior space. Evidence of such is a wheelbase utilization rate of 68.7% for its cabin. The Coolray’s exterior design was penned by British designer Jamie Barrett, who also led the design team for the entire vehicle, presumably for consistency. Chinese designers Cong Mei Song and Gu Mian, were responsible for the interior and color fabric, respectively. Cong is said to have extensively drawn inspiration from ‘Star Wars’ and jet fighters for the cockpit of the Coolray.

There is a good chance that the Proton version, the X50 will have some changes to the cabin when it is launched in Malaysia early next year. Illumination will be provided by full LED projector headlamps which are accented by LED daytime running lights which are actually incorporated into the fascia design which expand the cosmos grille as dazzling stars. The interior is very futuristic and fun with premium touch materials and colors with some elements like the speaker grills and central air vents paying tribute to classic Chinese lattice design.

The instrumentation is a fully-digital 7-inch LCD unit which gives a different display depending on the driving mode (eco, normal, or sport). A central-mounted floating 10.25-inch HD touchscreen gives more access for infotainment and connectivity. Controls are ergonomically placed with everything well within reach. The electronic shifter allows for a two-level center stack for extra cubby holes for mobile devices which should pretty much discourage you from driving distracted. PH-bound versions will also be equipped with a panoramic sunroof. Under the hood is a 1.5-liter turbo 4-cylinder rated at 174 PS and 255 Nm co-developed with Volvo. The engine is mated to a Geely-built 7-speed dual-clutch automatic transmission.

The Geely Coolray rides on MacPherson struts up front and a torsion beam rear suspension, combined with an electronic power steering system.