Her Perodua Myvi may be crushed but the driver escaped with no injuries.

These freak accidents involving large objects falling onto cars seem to be the hot thing on the news lately, as the latest episode of this continual problem is part of a tower crane falling off a trailer and striking a Perodua Myvi.

This incident bears close resemblance to the incident involving a concrete slab crushing a Proton Saga that was reported earlier. Both accident victims 25 year old women driving alone when the accident occurred, and both drivers escaped seemingly deadly incidents with only minor injuries. Based on a statement by Petaling Jaya district police chief ACP Nik Ezanee Mohd Faisal, this incident occurred at Jalan SS2/24, Petaling Jaya around 5.45 pm yesterday. The same day as the incident mentioned above that happened on the MRR2.

The impact of part of the tower crane crushing the Myvi resulted in damage to the roof, windscreen and several other parts of the car. The victim on the other hand escaped with no injuries.

Motorists who were at the scene of the accident rushed to provide first aid in addition to controlling the traffic situation.

News reports indicate that the woman has already lodged a police report, while the driver of the trailer has yet to do so. An investigation paper was opened under Rules 19 of the Road Traffic Rules 166/59, as it was fallen cargo that caused the accident.

While the lorry driver is mainly to blame for this accident, some blame would also lie on town planners. Having used that road frequently, there is a point to be made about it not being suitable for large commercial vehicles, especially with wide and unwieldy loads. This road, like much of the roads in old PJ, is a product of the olden days when cars were still small and narrow. As time progressed though, cars got wider but the roads have no place to expand to. Just look at the picture above and you’ll notice that right on the edge of the road are shop fronts. So while the lorry driver should have been more cautious through these tight roads, there is some degree of sympathy to be had as the driver would have probably been looking out as to not cream the edges of the cars on the other lane too. There is an argument for the driver to have used a different route instead. At the end of the day though, large vehicles on tight narrow roads will inevitably lead to accidents like these happening. This is not the first time, and it will certainly not be the last. The takeaway here for drivers is to probably not follow too closely behind a large vehicle carrying a large load, because you might not be as lucky as this woman here. 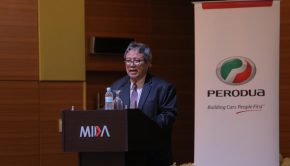