Allianz Is Already Paying Out To Their Flood Hit Customers

Flash flood victims with Allianz coverage is already being looked after.

Klang Valley just got 30 days of monsoon rain in one weekend and there was no warning for many residents, car owners and also business owners. Badly affected areas include Shah Alam and most of Kuala Lumpur city center.

The aftermath for many residents and business owners is beyond belief and the RM1,000 compensation from government for affected home owners will not be enough for many as the weekend flash floods caused havoc in many new and also older housing areas.

This is why insurance provider, Allianz General is not waiting around, they have already deployed teams to start looking after their customers affected by the recent weekend flash floods.

Well, it is great to know that Allianz General has just released a statement that they are providing flash flood claims settlement for its customers as the Country faces the worse flooding in recent years. PRESS RELEASE: As we already know, the continuous heavy downpour from Friday (17 December) that continued into Saturday saw areas across Selangor worst hit by floods, with other areas including the capital Kuala Lumpur, Negeri Sembilan, Melaka, Kelantan, and Pahang, Terengganu also affected.

Speaking to reporters, the Allianz General Head of Claims, Damian Williams, said the Company will facilitate fast claims settlements and has positioned Allianz-branded 4x4s and a team of adjusters on standby in Selangor and Pahang to attend to customers promptly.

The 4x4s and Claims Caravan will be routinely deployed to other locations in other affected states to allow for a swift and seamless claims process.

“This is unprecedented circumstances, and the damage has been immense. We mobilised our Allianz-branded 4x4s and team of adjusters on Friday. However, due to the forced closures of major roads and highways and inaccessibility, as well as the influx of cases, our customers will see some delay in services and assistance,” said Damian.

“Nevertheless, our responsibility as an insurer is to our customers, first. The sole purpose of our claims initiative is for moments like this. Our communities are in desperate need of help, and they are relying on us for assistance. We will deliver on our promise of providing fast claims so they can get back on their feet during this difficult time,” added Damian. For individual policyholders (such as Smart Home Cover), the Company will pay out a full claim settlement or an interim payment within five days after the site visit from the adjuster.

Allianz General customers can call 1-800-22-5542 for an adjuster will be sent to survey the affected property within 24 hours. 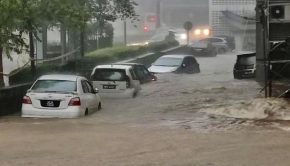