The Mercedes-Benz Malaysia Advanced Modern Apprenticeship 2022 has opened its applications until the 30th of July. It is a three-year The Isuzu D-Max X-Terrain gets an update

When it comes to pickup trucks in Malaysia, the choices are quite clear. It’s either the Isuzu D-Max X-Terrain, Toyota

EV Charging Rates To Go Up In Malaysia Soon

Electric vehicles (EV) have finally started surging into Malaysia thanks to the government’s tax incentive. Many car companies have used GoCar Malaysia has expanded their services across Peninsular Malaysia, opening workshops in Johor Bahru, Penang and Melaka. GoCar are doing

Jaguar Land Rover Malaysia have just launched the new Jaguar XF with a refreshed design and interior. This new model 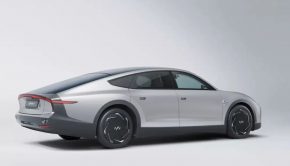 A huge breakthrough has just been made. Netherland-based EV startup, Lightyear have just officially launched the world’s first production-ready solar

Proton X70 gets updated with engine options and new looks

The Proton X70 was first launched in 2019, and was the first vehicle produced after their collaboration with Geely. It All Jaguar Land Rover (JLR) vehicles will now be integrated with what3words global location technology in their navigation system. This