Mercedes-Benz has just celebrated its 125th anniversary in motorsport at last weekend’s German Grand Prix. IWC would like to offer BMW and Mercedes-Benz to work on automated driving together

Surprising news for the fans of self driving cars, the two biggest german car brands have announced a collaboration to 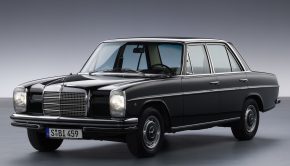 The Mercedes W114 was the first post-war Mercedes-Benz production car to use a newly engineered chassis, not derived in any