A massive 28% spike in sales was experienced by Porsche over in this region, thanks mainly to the Taycan.

While most of the world were still going through various stages of lockdown due to the resurgence in Covid-19 cases over the first quarter of the year, Porsche customers however didn’t seem to be deterred as the German premium automaker still managed to deliver 827 sports cars from January to March of 2021. Marking its best first quarter sales performance ever, with a 28% growth from the year before.

Perhaps more interestingly though is the fact that nearly half of all units delivered in this quarter were electrified in some way, either by being fully electric or PHEVs. In fact, Porsche has announced that a staggering total of 150 all-electric Taycans have already been handed over to customers during this period. Accounting for nearly 20% of the total deliveries made during the first quarter, the other interesting factoid dropped by the Stuggart-based manufacturer is that over 60% of owners who took delivery of their brand new Taycans over the last three months were completely new to the brand. A feat in which Porsche takes to be a testament to its initiatives introduced in order to accelerate the marque towards the age of electric mobility, with the ultimate goal of having half of its new vehicles sold to be electrified in some way by the middle of the decade.

Speaking a bit more on the initiative introduced by Porsche in promoting e-mobility across the Asian Pacific region, the headline news of recent time in this department would be its partnership with Shell for ‘the implementation of the first cross-border high performance charging network in Southeast Asia’. In lay man terms, this equates to the installation of 180 kW direct-current (DC) fast chargers at six Shell petrol stations along the North-South Expressway (PLUS). New rapid charging points for Malaysian Taycan owners have also been added to the newly recently opened Porsche Centre Ara Damansara, as well as the upcoming Porsche Centre Johor Bahru. Prospective Porsche owners in Vietnam meanwhile will get to experience the new Porsche Studio Hanoi that had recently opened its doors over there. Continuing on the topic of the ASEAN market, Porsche still pledges that this aforementioned region will still remain a key focus area for the automaker. Though this should not come as a surprise seeing that Thailand, Singapore, and Malaysia has emerged as top sales performers for the sports car marque within the region.

As for what is to come for the year ahead for Porsche, the automaker has rather vaguely said that it will continue ‘to deliver new experiences that excite and engage with customers and potential fans’ with fresh initiatives and more partnerships in the pipeline. More concrete however is the information that the new 992 991 GT3 will soon be heading over here some day soon, which is certainly exciting news indeed. Electrification was a central driver for the business, with 47% of all units delivered being either battery electric vehicles (BEVs) or plug-in hybrid electric vehicles (PHEVs). This sets the company on the fast track to realise its global ambition, that by 2025, half of all new Porsche vehicles sold will be electrified, either fully or with a hybrid drive.

First deliveries for the all-electric Taycan were also made, with 150 units handed over to customers this quarter, accounting for nearly a fifth of total deliveries. Along with New Zealand, the three neighbouring markets of Thailand, Singapore, and Malaysia emerged as top performers, highlighting the importance of Southeast Asia to the brand. Recognising the high business growth potential that the region holds, the ASEAN countries will remain a key focus area for Porsche as the company continues shaping the future of the sports car.

“The collaborative mindset and pioneering spirit that drives the Porsche team including our importer partners has proven instrumental in sparking innovative ideas and delivering strong results. It is also encouraging that customers appreciate our enduring commitment to making sure that every Porsche is a sports car, as both our hybrid and fully electric vehicles have been received with even greater enthusiasm and passion than expected,” said Arthur Willmann, Chief Executive Officer of Porsche Asia Pacific.

More than 60% of the Taycan owners who took delivery of their electric sports cars this quarter were completely new to the Porsche family, testament that the initiatives Porsche introduced to accelerate in the age of electric mobility are quickly gaining traction.

Following the launch of the all-electric Taycan, and the introduction of carbon-offsetting initiative Porsche Impact in 2020, sustainability will continue to be an important focus for Porsche Asia Pacific this year. A recently announced collaboration with Shell will enable the implementation of the first cross-border high performance charging network in Southeast Asia, connecting Singapore and Malaysia. The partnership covers six Shell stations equipped with 180 kW direct-current (DC) chargers, offering the highest charging capacity across both countries. The initiative underlines the brand’s commitment to spearheading connectivity in the region.

Continuing to deliver new experiences that excite and engage with customers and potential fans will be a priority, with fresh initiatives and more partnerships in the pipeline. Porsche Asia Pacific is also committed to keep bringing the brand to new audiences via uncharted avenues. Following the “Driving Tomorrow” pop-up exhibition hosted at Singapore’s Jewel Changi Airport that attracted over 20,000 visitors earlier this year, the new Porsche Studio Hanoi in Vietnam’s vibrant capital led the way as the global pilot for a new store concept that brings a more contemporary, boutique-like feel to the brand’s urban retail format.

Finally, customers and enthusiasts can also continue to expect a robust sports car line-up, starting with the recent introduction of the fourth model in the fully-electric Taycan family as well as the upcoming new 911 GT3, ensuring the Porsche vision of offering a dream car for every type of customer is very much alive in the new year. 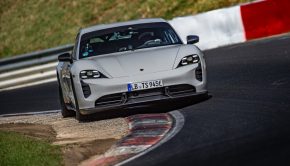