Perodua Will NOT Launch An Electric Car In Malaysia Soon

In a recent press event with senior Perodua management the question of an electric car arriving was asked (due to the recent Budget 2022 tax cuts for electric vehicles) and the reply was simple (as we had already guessed), NOT anytime soon.

There is no point in producing an electric vehicle in the next 24 months if the charging infrastructure is not good enough. The investment to produce an electric car against the number of units sold must make sense for a mass market brand like Perodua. Proton will also be having the same issue for cars under RM80,000. However, to sell an electric car costing more than RM101,000 could be a starting point.

Average Malaysians might like and be interested in the advanced technology but they are not ready to buy an electric vehicle yet because of the slow expanding charging infrastructure and the issue of replacement battery costs after 8-10 years.

Yes, as the battery costs remain high, lower income car buyers worry about resale value of an EV after 5-7 years as the battery healthy might push used prices down.

Example, a Renault Zoe electric car (which is probably still the best selling EV in Europe) which was launched in Malaysia in March 2016 for RM145,888 is selling in the used car market today for between RM45,000 and RM55,000 depending on battery health.

In the near future Perodua will be launching a hybrid powered car with great fuel savings and it will come as the Ativa Hybrid. We have already spotted the Ativa Hybrid on test on our roads and it is just a matter of months before it is launched. So, having the relationship with Perodua and being fully manufactured in Malaysia under the watchful eye of big brother ‘Toyota’ we Malaysians will soon be getting a value for money e-SMARThybrid crossover. Yes?

Meanwhile the interest in electric vehicles (EVs) is growing in the Association of Southeast Asian Nations (ASEAN) and East Asia. In 2019, the total number of vehicle sales in ASEAN Member States was 3.4 million, according to the ASEAN Automotive Federation. It is said that the number will increase in the coming 50 years due to population growth and economic development.

Since automobiles are expected to be increasingly sought after with economic growth, it is necessary to consider how to cope with the growing demand for fuel consumption and air pollution, such as greenhouse gas (GHG) emissions, particulate matter (PM), nitrogen oxide (NOx), and sulphur oxide (SOx) in some city areas.

Emerging EV technology could bring about improvements in energy efficiency as well as the environment and health of human beings. 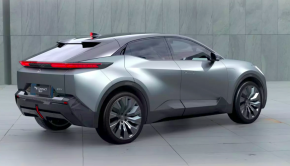