It is not good news for the good people at Tata Motors and their brands, Jaguar Land Rover as losses all around have just been reported. However, the sun will soon be shining when the all new Defender is launched this year as it will be a global success after a very long wait for many. Press Release: The all new Land Rover needs to arrive in showrooms very soon to prop up the losses of Jaguar Land Rover this last year. They had a pretax loss of 395 million pounds before exceptional items during the quarter, compared with a 264 million pound loss in the year earlier period, Tata Motors said in a statement on Thursday this week. Quarterly revenues had declined 2.8 percent to 5.1 billion pounds.

Global retail sales of Land Rover and Jaguar vehicles fell 11.6 percent to 128,615 for the quarter. However, JLR had record sales in its UK home market, up 2.6 percent year-on-year, while China sales rose in June compared with the prior month. Press Release: Retail sales of 128,615 units with solid demand for Jaguar I-PACE and new Range Rover EvoqueRevenues of £5.1 BnPre-tax loss of £395 Mn, consistent with outlook provided for the quarter On track to deliver £2.5B of Project Charge cash and cost savings Expect increased sales from new models and cost savings from Project Charge to improve results with a profit for the full year

With industry volumes down in most regions, Jaguar Land Rover reported a year-on-year 11.6% decline in its global retail sales to 128,615 vehicles for the quarter. Encouragingly, the company had record sales in the UK, up 2.6% year-on-year for the period, while China sales rose in June compared with the prior month.

Sales of the award-winning all-electric Jaguar I-PACE and the new Range Rover Evoque were up year-on-year, which partially offset the impact of weaker market conditions on other models. The company also launched the refreshed Discovery Sport and Jaguar XE in the quarter.

The company reported a pre-tax loss of £395 million, compared to £264 million loss in the same period a year ago, on quarterly revenues that declined 2.8% year-on-year to £5.1 billion. The results are consistent with the outlook for the quarter and primarily reflect lower revenue resulting from the weaker market conditions. Additional plant shutdown time and delays in WLTP certification resulting from Brexit contingency planning also contributed to the lower sales and profits.

Jaguar Land Rover continued to benefit from the ongoing impact of its £2.5 billion profit and cash improvement programme, which delivered a further £100 million of cost-savings and £300 million reduction to previously planned investment in the quarter, taking the total savings to date to £1.7B.

While free cash flow was negative £719 million after £795 million of investment spending in the quarter, this represented a £954 million improvement year-on-year. This improvement reflects £756 million of favourable working capital (including £305 million from utilization of a new receivable financing facility) and £271 million from lower investment spending.  The UK government has also announced that UK Export Finance (UKEF) will provide a £500 million guarantee for a planned £625 million loan facility from commercial banks.  The loan facility is expected to be completed in the coming months and amortize over five years.

Jaguar Land Rover reiterates that its financial results will improve over the balance of the year and continues to target a 3%-4% EBIT margin for the full year with continued investment resulting in negative but improving cash flows. Prof. Dr. Ralf Speth, JLR Chief Executive commented, “Jaguar Land Rover is in a period of major transformation. We are simplifying our business, delivering on our product strategy and adapting to the tough market environment. We will build on our strong foundations and increased operating efficiency to return to profit this fiscal year.  In this period, we expect to see the impact of growing demand for new models such as the Range Rover Evoque, Discovery Sport and Jaguar XE, whilst implementing our ‘Charge’ transformation programme. Despite challenging conditions in the first quarter, Jaguar Land Rover is creating a more robust and resilient business, in which we will continue to deliver a strong pipeline of products that our customers will love. Break through products such as the exciting all new Land Rover Defender will pave the way for sustainable profitable growth” 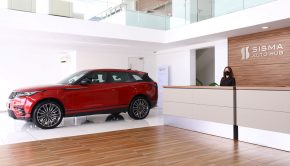