The world’s most powerful production car, the stunning Lotus Evija hypercar gets a Fittipaldi edition.

This Lotus battery powered hypercar was first unveiled in July 2019. Its design and 1972bhp performance figure drew a lot of attention from the sports car world.

Now, the company delivers even more exclusivity and desirability which has been inspired by the past to enhance the future.

Lotus Cars has just unveiled the Evija Fittipaldi, a tribute to one of the greatest car-and-driver pairings that Formula 1 has ever seen. A stunning piece of contemporary automotive design which is the work of a team led by Lotus Design Director Russell Carr, the Evija features a dramatic Venturi tunnel through each rear quarter, giving it a truly breath-taking presence. This ‘porosity’ means optimized airflow, with air channeled not just over, under and around the Evija but through it, maximizing downforce while minimizing drag. Its front splitter aids grip while channeling cooling air to the battery pack, E-motors and brakes, and active aero features such as a Formula 1-style DRS (Drag Reduction System) bestow the Evija with cutting-edge performance. With driving dynamics overseen by the team of Gavan Kershaw, the world-renowned Vehicle Attributes Director for Lotus, the Evija is a car like no other. The first Lotus road car to feature a one-piece carbon fibre monocoque chassis, the cabin, from the fully adjustable race-style seats to the multi-function steering wheel which is the very pinnacle of motorsport-inspired road car design and technology. Just as the Lotus Evija is defining a new era of pure electric performance, so the Lotus Type 72 remains the most successful racing car not just of its day, but in F1 history. In 2019 Autosport magazine named it the greatest ever F1 car. A revelation both on the drawing board and on the track, the Type 72 was the first racing car to incorporate aerodynamics as part of its initial design. The integrated rear wing and front splitter were designed specifically to allow the car to slice through the air while also creating vital downforce.

The Type 72’s air intake was relocated above the driver’s head, ensuring undisturbed and clean air could be sucked straight into the engine, while its radiators were placed in the side-pods of the car rather than the nose. This not only increased cooling efficiency but improved weight distribution and therefore performance in the process.

The same approach was also taken for the brakes, mounting them inboard rather than on each wheel to aid cooling as the tops of the discs protruded through the bodywork.

The Type 72 was the first of what became the traditional “wedge on wheels” designs that soon inspired every other competitor on the grid. The question some of you might be asking is this. When will the Evija arrive in Malaysia? When will we see this limited edition on our roads? 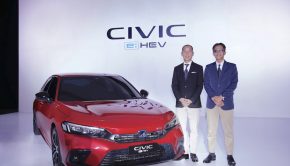