Revealed in Michigan as part of the seventh generation Ford Mustang unveiling, the Ford Mustang GT3 will officially debut in the Rolex 24 at Daytona in 2024 in a two car factory effort operated by Multimatic with customer cars available for other championships where FIA-GT3 cars are eligible to compete in such as Fanatec GT World Challenge, and in 2024, the FIA World Endurance Championship and the 24 Hours of Le Mans. 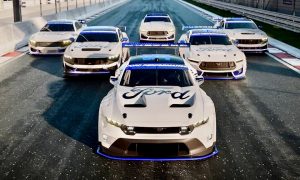 The Ford Mustang GT3 was one of several race cars unveiled, including its GT4 sibling which will race in 2023.
Specifications for the GT3 car was not released, however the most extreme of the road going Mustangs unveiled, the Dark Horse will pump out 500bhp from a 5.0-litre coyote V8. “Mustang is raced at all the great tracks around the world, but there is no race or track that means more to our history than Le Mans,” said Bill Ford, executive chair, at “The Stampede, “the debut of the all-new seventh-generation Ford Mustang. “It’s where we took on Ferrari and won in the 1960s and where we returned 50 years later and shocked the world again.

“Mustang will go back to Le Mans. Once again, we will ‘Go Like Hell.’”

Ford won Le Mans in four straight years with Ford GT 40 beginning in 1966 when it swept the podium with a 1-2-3 finish. Ford last won the 24 Hours of Le Mans with the Chip Ganassi Racing-run Ford GT in 2016.

In addition, Ford showed a new Mustang GT4 available for customers that will debut in the 2023 season. The car could see competition in IMSA’s Michelin Pilot Challenge and SRO Pirelli GT4 America.

Meanwhile, Ford once again sounds a wake-up call for sports car lovers around the world with the introduction of the all-new Ford Mustang. The seventh generation is the most exhilarating and visceral yet, from its fighter jet-inspired digital cockpit to new advanced turbocharged and naturally aspirated engines to its edgier yet timeless exterior design.

“Investing in another generation of Mustang is a big statement at a time when many of our competitors are exiting the business of internal combustion vehicles,” said Jim Farley, CEO of Ford Motor Company. “Ford, however, is turbocharging its ICE growth plan, adding connected technology, opinionated derivatives, and hybrid options to our most profitable and popular cars – all in the Ford Blue family – on top of investing $50 billion in electric vehicles through 2026.”

The new Ford Mustang adds another chapter to an icon, delivering the looks, sound and appeal of the world’s best-selling sports coupe for seven years running.

Whether convertible or coupe, V8 or turbocharged 4-cylinder, manual or automatic, Mustang has options at multiple price points and performance levels.