After years of anticipation by the international automotive fraternity,..." /> Ferrari Purosangue Unveiled With V12 And Not Hybrid Power - Automacha
Automotive Ferrari Purosangue Unveiled With V12 And Not Hybrid Power

After years of anticipation by the international automotive fraternity, Ferrari has just unveiled the Purosangue, the first ever four-door, four-seater car in the Prancing Horse’s 75-year history, in the magnificently atmospheric surroundings of the Teatro del Silenzio in Lajatico (Pisa). Since the marque’s earliest years, 2+2 cars (i.e. with two front and two smaller back seats) have played a significant role in its strategy. Many Ferraris have made combining benchmark performance with first class comfort one of the pillars of their success.

Interestingly in the culmination of 75 years of leading-edge research, Ferrari has created a car that is unique on the world stage: not only do performance, driving pleasure and comfort coexist in perfect harmony, but it is also a peerless encapsulation of the Prancing Horse’s iconic DNA.

This is the reason why the name Purosangue, Italian for ‘thoroughbred’, was chosen.

Therefore, to enable the company to achieve the ambitious goals set for this project and create a car worthy of a place in its range, a completely different layout and innovative proportions compared to modern GT archetypes (so-called crossovers and SUVs) were adopted.

Incase you did not know, the average modern GT’s engine is mounted forwards in the car, almost straddling the front axle with the gearbox coupled directly to it; this results in less than optimal weight distribution that delivers driving dynamics and driving pleasure well short of the standards of excellence to which Prancing Horse clients and enthusiasts have become accustomed. 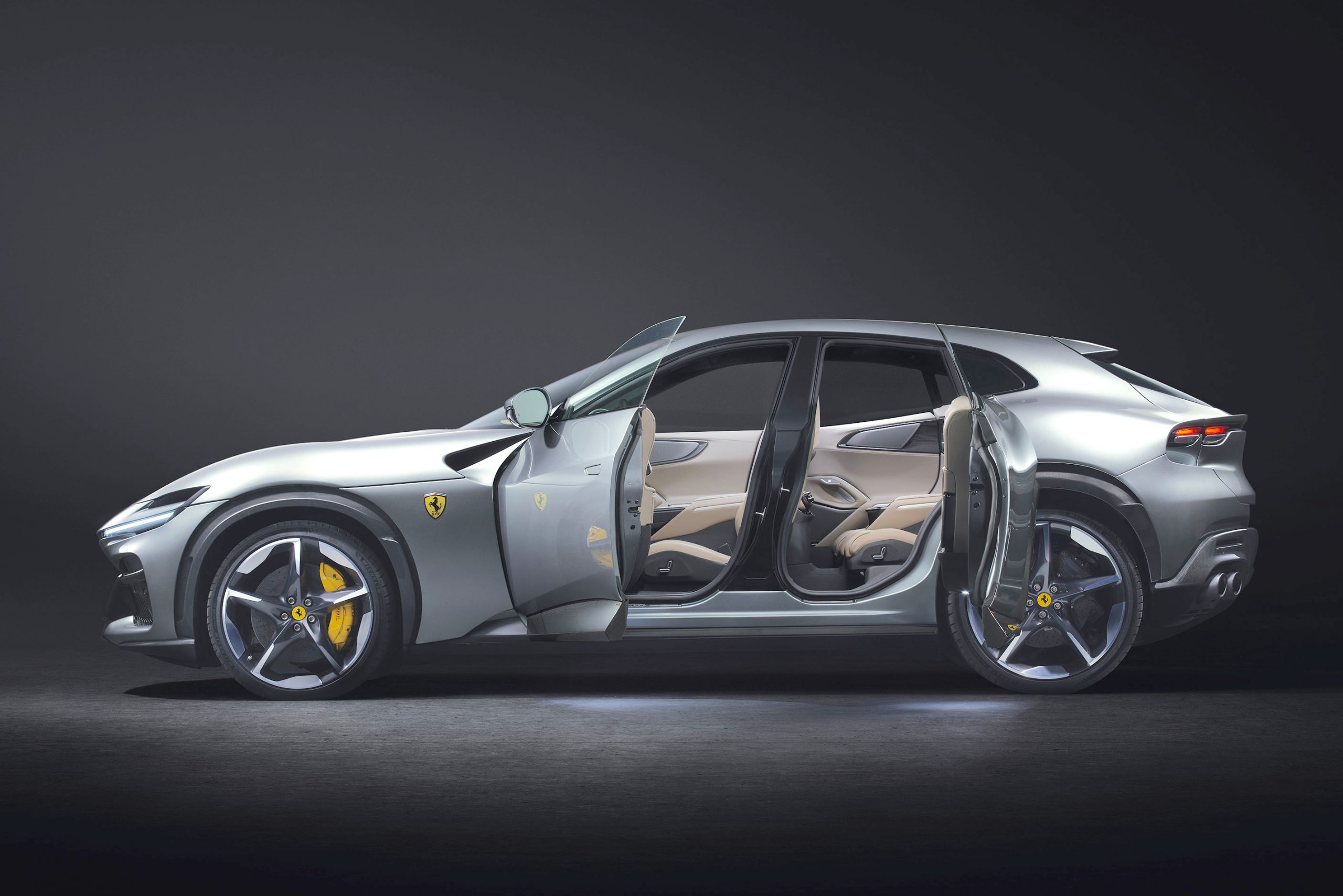 Interestingly, the Purosangue, on the other hand, has a mid-front-mounted engine with the gearbox at the rear to create a sporty transaxle layout.

The Power Transfer Unit (PTU) is coupled in front of the engine to provide a unique 4×4 transmission. This delivers exactly the 49:51 percent weight distribution that Maranello’s engineers deem optimal for a mid-front-engined sports car. The Purosangue stands head and shoulders above the rest of the market thanks to its performance and comfort. It is the only car with these proportions to sport a mid-front-mounted, naturally-aspirated V12.

Maranello’s most iconic engine debuts in this brand new configuration to ensure the car unleashes more power than any other in the segment (725 cv) whilst guaranteeing the most enthralling Ferrari engine soundtrack. Furthermore, it can deliver 80 percent torque even at low revs for unique driving pleasure at all times.

The Purosangue’s aero development focused on making the bodywork, underbody and rear diffuser as efficient as possible. New solutions include synergy between the front bumper and wheel-arch trim which generates an air curtain that aerodynamically seals the front wheels, preventing turbulent transverse air flows being generated.

Ferrari has also given the Purosangue the very latest iterations of the vehicle dynamic control systems introduced on its most powerful and exclusive sports cars, including independent four-wheel steering and ABS ‘evo’ with the 6-way Chassis Dynamic Sensor (6w-CDS).

Making its world debut is the new Ferrari active suspension system. This very effectively controls body roll in corners as well as the tyre contact patch over high-frequency bumps to deliver the same performance and handling response as in one of the marque’s sports cars.

The all-new chassis has a carbon-fibre roof as standard to keep weight down and lower the centre of gravity. Redesigning the body-shell from scratch also meant the designers could incorporate rear-hinged back doors (welcome doors) to make ingress and egress easier while keeping the car as compact as possible.

The cabin has four generous heated electric seats that will comfortably accommodate four adults. The boot is the largest ever seen on a Ferrari and the rear seats fold to increase the luggage space.

Naturally enough, the Purosangue has a more commanding driving position than other Ferraris, but the configuration is the same as on every other Ferrari. As a result, the driving position is still intimate and close to the floor to provide greater connection to the car’s dynamic capabilities. The Purosangue offers class-leading performance figures (from 0 to 100 km/h in 3.3 s and from 0 to 200 in 10.6 s); the driving position and the heady, naturally-aspirated V12 soundtrack (why not the powerplant used in the 296 GTS) deliver an entirely new yet also entirely Ferrari driving experience.

The fact that a vast array of comfort-focused content is provided as standard, such as the Burmester© audio system, and that the many optional extras including the brand-new Alcantara® upholstery, derived from certified recycled polyester, make the Purosangue the most complete four-door, four-seater in the segment.