myTukar has been appointed by EON to be a trade-in partner in its local sales operation. According to myTukar CEO Fong Hon Sum, this mutually beneficial partnership will allow myTukar to tap into EON’s established and extensive distributor network. EON meanwhile will be able to enhance its used car trade-in process to its customers through the proprietary technology-enabled services offered the used car online trading platform. Offering an instant and transparent valuations for their trade in vehicles through on-demand appraisals by certified inspectors, Dato’ Sri Syed Faisal Albar, Group Managing Director of DRB-HICOM believes that myTukar’s innovative trade-in system would be able to ‘enhance the overall customer experience at all our outlets’. Additionally, there is hopes too for EON that this new partnership will help boost sales of new automobiles throughout its 20 dealerships which operate Proton, Mitsubishi, Audi and Volkswagen.

Speaking further about this partnership, it is set to only cover peninsular Malaysia at present. Nevertheless, with myTukar agressively expanding to East Malaysia, there are undoubtably plans ahead for the used car trading platform to facilitate EON locations over there too in the near future. Established in 2018, over 27,000 vehicles have been transacted through its online service which totals to an estimated value of RM 805 million. To add to that too, myTukar became the first within the used car market in Malaysia to be awarded the prestigious ISO 9001:2015 Certification for Quality Management Systems. Fong Hon Sum, myTukar CEO believes the partnership will benefit from EON’s established distributor network, while providing EON the opportunity to enhance their service to customers.

“myTukar is honoured to embark on this partnership journey with one of Malaysia’s most diverse conglomerates with a comprehensive automotive business. The collaboration will enable EON to leverage on myTukar’s proprietary technology-enabled platform to provide EON’s customers with instant and transparent valuations for trade-in vehicles. This will enhance customer experience at EON’s network because they are now effectively a one-stop solution centre,” said Fong.

Dato’ Sri Syed Faisal Albar, Group Managing Director of DRB-HICOM echoed Fong’s belief, stating that the partnership is a win-win situation that provides both parties with tremendous potential and possibilities.

“There is great synergy in this partnership and we are very pleased indeed to have found a like-minded partner in myTukar. Trade-ins has always been a sore point for car buyers, who today are increasingly demanding a more transparent and simplified process in their transactions. We believe myTukar’s innovative trade-in system will help boost sales of new automobiles across our branches, and more importantly enhance the overall customer experience at all our outlets. This will lead us to create more value for our customers,” said Syed Faisal.

The collaboration with EON will for a start only cover peninsular Malaysia. However, myTukar has been on an aggressive expansion drive this year with the opening of seven new branches throughout the country. Further expansion to East Malaysia starting with Kuching and Kota Kinabalu is also in the pipeline, which is set to further benefit EON in the future.

myTukar is the first within the used car online trading platform in Malaysia to be awarded an ISO 9001:2015 Certification for Quality Management Systems. The certification is part of myTukar’s continuous effort in ensuring the highest levels of quality, trust and transparency throughout all stages of car selling on the innovative technology-enabled platform, to complement its ongoing expansion. 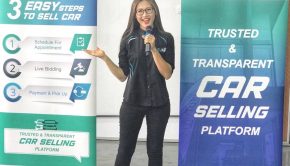