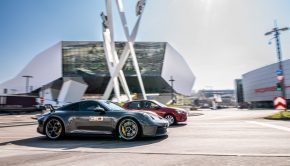 With the Vios Challenge already underway in the fifth season of the Toyota Gazoo Racing Festival, UMW Toyota Motors are

Round 1 of Season 5’s Vios Challenge of the Toyota Gazoo Racing Festival has just ended. It saw two days Six years after its introduction in Malaysia in 2017, the Toyota Gazoo Racing festival is making a return for Season World class lubricant brand, Motul has announced itself as the official lubricant partner for Matt Stone Racing at the upcoming Ducati Lenovo team continue their partnership in the MotoGP

Ducati and Lenovo are planning on continuing their partnership for the new 2022 MotoGP season. Both brands have been collaborating The Tag Heuer Porsche Formula E team has achieved a historic one-two win at the Mexico E-Prix. Pascal Wehrlein, No.94