Proton Prices In Pakistan Drops Thanks To CKD Assembly

The Pakistani government’s recent tax cuts have helped bring Proton prices down too.  Good news to the people in Pakistan

Only 2,000 units of these Special Edition Proton X70 SUVs will ever be produced.  Proton has recently announced the arrival Six major Proton related international developments are to happen in the coming weeks.  Despite the turbulent economy in this current 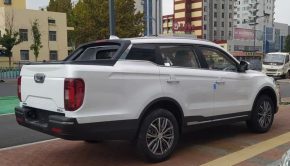 Beneath all the weirdness is actually quite a compelling package.  Ever thought your Proton X70 SUV could be just a

The Proton X70 is a fantastic car, but don’t we have local talent to produce something of that caliber without An important consideration for anyone looking to buy Proton’s popular X70 SUV.  A very frustrated owner of a Proton X70 No news yet on condition of occupants in both crashed vehicles.  News just broke regarding a collision between a Proton