The XV name will be dropped globally for the name Crosstrek.

Subaru Crosstrek (as it was always named in North America) is the next generation XV which has been a popular all wheel drive crossover in Malaysia since the first model appeared in November 2012 under Motor Image.

The second generation XV made its ASEAN debut in June 2017 in Taiwan and was an instant best seller in all ASEAN markets. Now comes an all new third generation model where the ‘XV’ name will be dropped and ‘Crosstrek’ will be used. This all new Subaru crossover will continue to provide class best handling from its all wheel drive system and high safety equipment.

Subaru has only detailed an AWD hybrid version of the Crosstrek for its domestic market, but the full drivetrain line-up is not yet clear. The powertrain used will be the existing 2.0-litre e-Boxer powertrain, which is able to deliver 110kW and 196Nm from a petrol powered engine with an electric motor assisting with fuel economy delivering 12.3kW and 66Nm. It is linked to a lithium-ion battery.

Subaru says that a lot of improvements have been made to the Crosstrek to reduce vibrations and noise in the engine and Lineartronic CVT also provides smoother power delivery. Under the new design that mimics the all new Impreza, this crossover rides on a version of the Subaru Global Platform underpinning the latest Levorg and Impreza.

Measuring 4480mm (which is 5mm less) in length, 1800mm (no change here) in width and 1580mm (which is lower by 35mm) in height with a 2670mm (increased by 5mm) wheelbase, this new crossover is smaller on the outside than the outgoing XV although its longer wheelbase will provide more interior space. The outgoing XV Hybrid has just 310 litres of space with the rear seats in place. Dual-pinion electric power steering reduces initial steering resistance and practically eliminates response lag, with the use of separate shafts for the steering’s operation and motor assist. This Subaru Crosstrek will offer exterior trim elements that include specific wheel arch mouldings and gunmetal finish for the front grille, side mirrors, antenna, and badges. Also standard will be 17-inch alloy wheels. 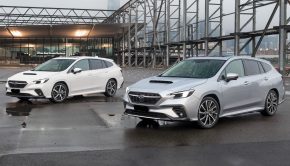