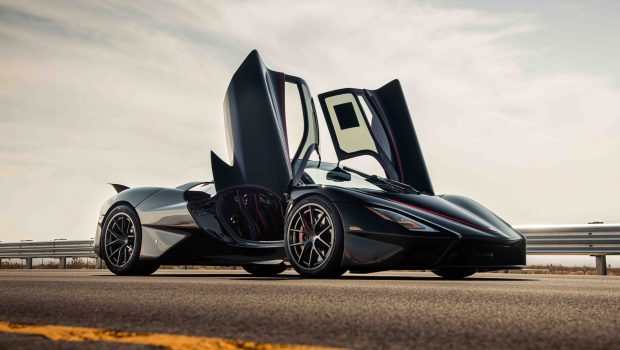 Move aside Chiron, the new American Tuatara hypercar is now the new king of speed.

Bugatti has long been associated with being the top-speed king in the hypercar realm. A legacy cemented by the Veyron, the 1,000 PS hypercar which was the first production car to smash the 400 km/h barrier.

That said, a relatively unknown American firm has always kept the French hypercar manufacturer on its toes in regards to its top speed title. SSC North America, touted to be America’s first hypercar company, has snatched the title away from Bugatti before. Its SSC Ultimate Aero beating the Veyron’s original top-speed record by 2 km/h at a verified 410 km/h. Now, with the 490 km/h Chiron once again holding the title of the king of speed, SSC is back at it again to wrest the title away away from Bugatti. And what would you know, they have actually done it with their latest hypercar, the 1,750 hp Tuatara. On the morning of October 10th, the SSC Tuatara has officially became the fastest production vehicle in the world. Clocking in at a two-way average of 508.73 km/h (316.11 mph), this American hypercar now also holds the claim to the first production car to smash the 500 km/h barrier. Powering the SSC Tuatara all the way into the record books is an engine totally unlike Bugatti’s iconic quad-turbo W16 power plant. Instead mounted within the carbon fibre monocoque of this American hypercar is a good ol’ V8 motor. It is not just any old V8 however, as developed in collaboration with Tom Nelson of Nelson Racing Engines, this twin-turbocharged flat-plane crank V8 pumps out the aforementioned 1,750 hp running on E85 flex fuel. Gear-shifting duties meanwhile is the responsibility of a CIMA 7-speed computerised manual transmission, that is hooked up to a ‘state-of-the-art Automac AMT system which operates the engagement and selection of movement in the gearbox’. What is most impressive on this awkwardly-named supercar though is perhaps its aerodynamic properties. It’s sleek body aerodynamic body only has a drag coefficient of 0.279, incidentally an all-time production hypercar best. Moreover, SSC claims that the body shape allows the Tuatara to maintain a perfect downforce distribution of 37% front, 63% rear from 240 km/h (150 mph) to 530 km/h (330 mph). A fact which Oliver Webb, the professional racing driver behind the wheel in the record-setting run, attests to. Stating “As I approached 331 mph, the Tuatara climbed almost 20 mph within the last five seconds. It was still pulling well. As I told Jerod, the car wasn’t running out of steam yet. The crosswinds are all that prevented us from realizing the car’s limit.” This means then it will probably not be the last time we hear about a new top-speed record being smashed. The question now is whether SSC will improve on this already impressive feat, or perhaps Bugatti would like to take a crack at returning to the top. Either way, let the competition continue! With internationally acclaimed professional racing driver, Oliver Webb, at the Tuatara’s wheel, the record-breaking drive took place on the morning of Saturday, October 10, outside of Las Vegas near Pahrump, Nevada along a seven-mile stretch of State Route 160. Officials were on site to verify all world record criteria was met — including review of Dewetron GPS measurements, which tracked the speed runs using an average of 15 satellites — and to confirm the new record.

“It’s been ten years since we held this record with our first car, the Ultimate Aero, and the Tuatara is leagues ahead. Its performance reflects the dedication and focus with which we pursued this achievement,” said Jerod Shelby, CEO of SSC. “We came pretty close to meeting the theoretical numbers, which is astonishing to do in a real world setting on a public road. America’s new claim to victory in the ‘land-based space race’ is going to be tough to beat.”

“There was definitely more in there. And with better conditions, I know we could have gone faster,” said Oliver Webb, who piloted the record run. “As I approached 331 mph, the Tuatara climbed almost 20 mph within the last five seconds. It was still pulling well. As I told Jerod, the car wasn’t running out of steam yet. The crosswinds are all that prevented us from realizing the car’s limit.” In addition to the “Fastest Production Vehicle” record, the SSC Tuatara broke the world records for:

In order to claim a world record, the Tuatara had to: Tuatara achieved its dominant speeds thanks to a host of features working in harmony, including: SSC has been the focus of many years of filming by award-winning storytellers at Driven Studios, as they’ve captured the ups and downs and difficult journey to the record-setting run for a documentary. In capturing the 331 mph run, Driven Studios employed state of the art techniques as intricate as the Tuatara itself. Nevada’s broad landscape and open skies provided inspiration from above, in the form of a subsonic T-33 jet from Pursuit/XM2. The unique aerial asset is capable of operating at altitudes as low as five feet from the ground, and would prove to be the ultimate ‘camera vehicle,’ given its speed of up to 400 mph could keep up with the Tuatara. A helicopter with the same gyro-stabilized Shotover system as the T-33, several drones and ground assets were also on-site to capture dynamic shots. The SSC team has worked tirelessly to prove one point: nothing is impossible if you believe in yourself and your dreams. Once again, a team of American innovators has given inspiration to those who seek to move the bar higher. SSC enjoys competition and mutual respect between other automakers, and the opportunity to innovate and push the needle in the common pursuit of performance.

Shelby shares his feelings on the culmination of passion, engineering, and intuitive thinking on the day of the speed run by saying, “We validate our engineering by building a car capable of going 330 mph. We validate our passion by accomplishing this, despite years of setbacks and challenges. And we validate our values by making sure Oliver’s safety was the first and foremost important goal of the day.”

“We see ourselves as a piece of history that we hope inspires others to break their own boundaries,” says Shelby. “The only way we got to where we are today is by breaking our own. Accomplishing a feat of engineering that pushes the limits of a road-legal car by a margin this large is both exciting and inconceivable, even to me. We are entering a time where we are no longer faced by the limit of machines, but by the human factor.” The Tuatara is a testament to this.