BMW has recently debut the new 4 Series Gran Coupe. The second generation of this four-door version of a coupe which was initially based on a sedan, this new iteration here is in essence the petrol-powered counterpart to the all-electric i4 launched earlier. Kicking things off with a discussion on its dimensions first, the new 4 Series Gran Coupe has grown by some 143 mm in length, 27 mm in width and 53 mm in height as compared to the outgoing model. This four-door fastback features a slightly wider track up front (+50 mm) and round the rear (+29 mm) than its predecessor for a better stance too, and is also interestingly a little bit (5 mm) longer between the wheels than the current 3-Series sedan. Unlike the current 3-Series sedan however, the 4 Series Gran Coupe retains the huge (and hugely controversial) lung-sized kidney grilles that first made its appearance on the two-door 4-er. In terms of overall design meanwhile, it is basically virtually identical to what was previously seen on its all-electric i4 counterpart. In fact, the only major difference between the i4 and the 4 Series Gran Coupe will (naturally) be what lies under the hood. That is because in place of an electric motor, there is instead a 2.0-litre turbocharged mild-hybrid four-pot in the case of the 420i and 430i, as well as a sole oil-burning power plant that comes in the form of a 2.0-litre four-cylinder diesel within the 420d. The main highlight to date in terms of powertrains though would be the mild-hybrid 3.0-litre turbocharged straight-six to be found within the M440i xDrive. Sending a combined 382 hp and 499 Nm of torque to all four wheels via an 8-speed Steptronic Sport automatic transmission (instead of the vanilla Steptronic variety in the other variants), this particular version of 4-Series Gran Coupe has been touted by BMW to be capable of hitting the 100 km/h mark from a standstill in 4.7 seconds and reaching an electronically-limited top speed of 250 km/h (155 mph). This range-topping M440i xDrive is also the only variant to come as standard with various sporty trinkets like an electronically-controlled M Sport rear differential, M Sport brakes and adaptive M suspension with adjustable shock absorbers. BMW being BMW though will no doubt be making these performance-enhancing bits available as optional extras on the more plebeian 4-er Gran Coupe variants too.

On the topic of handling, the German automaker claims that this new iteration of the 4 Series Gran Coupe is much improved in this department over its predecessor, courtesy of its near 50:50 weight distribution, low centre of gravity and additional chassis stiffening over the outgoing model. Much like its current two-door counterpart too, the four-door 4-er features lift-related dampers as standard as well as a variable sport steering system. Now moving on inside, the 4 Series Gran Coupe borrows nearly all of the same interior design and kit from its sleeker two-door sibling. This therefore equates to the availability of a 12.3-inch digital instrument cluster and a 10.3-inch central infotainment touchscreen running the previous-generation BMW Operating System 7, as well as remote software update capabilities, a digital key and a whole host of active and passive safety tech too. For those however who wishes for even more excitement from their four-door 4-er though, BMW has announced that it would soon be launching a full fat M version too. The first ever version of the M4 Gran Coupe is currently slated for launch sometime next year. PRESS RELEASE: With the original BMW 4 Series Gran Coupé having enjoyed significant success, a second-generation model is now being added to the latest 4 Series range. The new four-door coupé captures the imagination with its noticeably enhanced driving dynamics, a sharper design following the BMW brand’s new design language, a refined premium feel for its interior and a host of innovations in the areas of operation and connectivity. In addition to the driving pleasure and sporting elegance for which BMW is renowned, modern functionality is central to this gran coupé concept for the premium midsize segment. Comfortable access to the rear compartment, five full-size seats, a large tailgate and a variable-usage load compartment ensure the new BMW 4 Series Gran Coupé retains its model-specific skillset in everyday driving and on longer trips.

This time around, a performance version of the new BMW 4 Series Gran Coupé courtesy of BMW M GmbH will be available from the car’s market launch (due to get underway in November 2021) alongside four other model variants. All will be built under a flexible manufacturing process at BMW Group Plant Munich on the same line as the all-electric BMW i4 and the BMW 3 Series Sedan and BMW 3 Series Touring models. The model-specific body concept results in a versatile interior offering generous amounts of space in the rear. The new BMW 4 Series Gran Coupé offers 470 litres of boot space, the primary capacity in the directly viewable area of the boot having grown by 39 litres. Load capacity can be expanded to a maximum of 1,290 litres by folding down the sections of the rear backrest, with its standard 40 : 20 : 40 split. Bold lines and surfaces with a three-dimensional structure are the defining elements of the new BMW 4 Series Gran Coupé’s expressive front end. Dropping deep down at its centre is the large and vertically prominent BMW kidney grille that transmits a feeling of assured presence. The slim full-LED headlights come with U-shaped fibre-optic light guides for the daytime driving lights. There is also the option of Adaptive LED Headlights with BMW Laserlight including BMW Selective Beam non-dazzling high beam assistant.

Precise lines, doors with frameless windows and flush-fitting handles, and powerful shoulders shape the elegantly sporty silhouette of the new BMW 4 Series Gran Coupé, while the roofline culminates in a pronounced spoiler lip on the tailgate. Horizontal lines are the dominant influence at the rear end. And the low-slung, muscular stature of the car is also accentuated by a rear apron with vertical aero lips at its outer edges and a Black finish for its lower edge. The stylishly darkened full-LED rear lights extend well into the flanks.

Bespoke design features add dynamic flourishes to M Sport cars and the BMW M model. An M Carbon exterior package can be specified as an option, and model-specific M Performance Parts are available as part of the Genuine BMW Accessory range. Interior: driving pleasure and spaciousness amid a premium ambience.

Inside the new BMW 4 Series Gran Coupé, the high centre console and flowing surface structure running from the instrument panel into the door panels generate a cocooning feel in the front seats. The Start/Stop button for the engine is positioned in a classily designed control panel in the centre console, which also houses the BMW Controller and the buttons for the Driving Experience Control unit and electromechanical parking brake alongside the model-specific gearshift lever. The rear seat bench with folding head restraints allows three child seats to be fitted.

Sport seats and a Sport leather steering wheel come as standard. The dynamic style of the interior is accentuated in the BMW M440i xDrive Gran Coupé and in M Sport cars by features including knee pads on the centre console. The list of optional equipment provides extensive scope for individualisation. Driving pleasure and comfort can be enhanced with items such as seat heating and ventilation, Vernasca and BMW Individual leather trim options, Sensatec or leather coverings for the instrument panel, the M Sport package Pro, a large glass slide/tilt sunroof, ambient lighting and the Harman Kardon Surround Sound System. In the BMW M440i xDrive Gran Coupé and the diesel variants of the new car, mild hybrid technology further increases dynamism and efficiency. The 48V starter-generator puts an extra 8 kW/11 hp on tap when accelerating off the line or putting in a quick burst of speed. An additional battery helps to further expand the scope for regenerating and storing brake energy.

All the engines team up with an eight-speed Steptronic transmission as standard. Meanwhile, the optional eight-speed Steptronic Sport transmission (standard in the BMW M440i xDrive Gran Coupé) complements its sharper shift dynamics and shift paddles on the steering wheel with a Sprint function. This prompts the powertrain and shift characteristics to maximise dynamic performance when putting in a sudden burst of speed or overtaking.

The sporting characteristics of the new BMW 4 Series Gran Coupé are also well served by a low centre of gravity and almost 50 : 50 weight distribution. An intelligent material mix has been employed to optimise the weight of both the body and chassis technology. And the bespoke body struts at the front end and in the rear axle area can also take credit for the car’s superb handling agility and precision.

An active air flap control system comprising flaps at the top and bottom, plus air curtains and an almost completely sealed underbody optimise the car’s aerodynamics. The drag coefficient (Cd) of 0.26 measured for the BMW 420d Gran Coupé, for example, represents a reduction of 0.02 over its predecessor.

Model-specific geometry, mounting and tuning for the sophisticated chassis technology in the new BMW 4 Series Gran Coupé imbue it with exceptional dynamic assurance. The two-joint spring strut front axle and five-link rear axle have likewise been engineered to reduce weight while increasing rigidity. Standard-fitted lift-related dampers enhance both sports performance and ride comfort. Depending on the spring travel, these provide extra damping to control body movement when driving over large bumps, as well as preventing excessive dive. The system reacts to minor imperfections in the road surface with low damping forces that produce high levels of comfort.

The lift-related dampers are particularly firm in nature on the BMW M440i xDrive Gran Coupé and on cars with the optional M Sport suspension specified. The adaptive M suspension available as an option combines the characteristics of M Sport suspension with electronically controlled dampers, and therefore offers the widest possible range of driving experiences on the sporty-to-comfortable spectrum. Variable sport steering is included with both optional suspension variants. Also available as an option are M Sport brakes (standard on the BMW M440i xDrive Gran Coupé). Some 40 assistance functions designed to enable comfortable and safe driving and parking are available as standard or options for the new BMW 4 Series Gran Coupé. Highlights include Active Cruise Control with automatic Speed Limit Assist, route monitoring and traffic light recognition (in Germany), plus Steering and Lane Control Assistant.

The driver and passengers in the new BMW 4 Series Gran Coupé benefit from the extended possibilities provided by BMW Operating System 7 as standard. Customers can take their pick of control interface for the situation at hand: control display touchscreen, familiar BMW Controller, multifunction buttons on the steering wheel, voice control or optional BMW gesture control. There is also access to a range of highly advanced digital services, including the BMW Intelligent Personal Assistant, BMW Digital Key, Connected Music and Remote Software Upgrades.

The standard-fitted BMW Live Cockpit Plus comprises the iDrive operating system with 8.8-inch control display and a 5.1-inch colour display in the instrument cluster. The optional BMW Live Cockpit Professional features a fully digital screen grouping including a high-resolution instrument cluster with a screen diagonal of 12.3 inches behind the steering wheel and a 10.25-inch control display.

The cloud-based BMW Maps navigation system offers extremely fast and precise route calculation and arrival times, real-time traffic data updates at short intervals and the ability to enter any word when searching for a destination. With smartphone integration fitted as standard, customers can use Apple CarPlay and Android Auto via the car’s operating system. And the Remote Software Upgrades function allows improved vehicle functions and additional digital services to be imported into the car over the air. 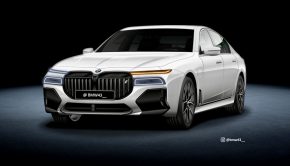 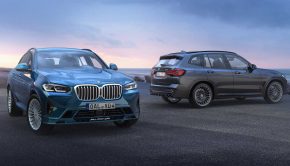 BMW Debuts Facelifted X3 & X4, Along With Their M Models →