Alpha Tauri scores a stunning victory in an epic race at Monza.

Pierre Gasly has won the 2020 Italian GP held at Monza. What was a fairly uneventful race at the start was eventually won by the Frenchman after a nail-biting second half. This upset of the 2020 Formula 1 season status quo all began near the middle of the race when Kevin Magnussen of Haas experiencing a mechanical failure which forced him to retire the car at the side of the track, near the pit entry. It was on the same lap that Gasly in the Alpha Tauri decided to pit early for a fresh set of medium tires, after running on the soft compound he used to secure his 10th place qualifying position the day before. Initially, this strategy call seems like the losing hand as not long after the safety car was called out not long after giving the opportunity for the rest of the grid to jump at the chance for a free pitstop. However, this chance did not materialise as the pit lane entry was closed due to the marshals deciding to push Magnussen’s stricken Haas back to the pits instead.

Many teams were quick to notice that the highly unusual call for the pit entry was in effect, however one of the teams that failed to notice this was Mercedes which called race leader at the time Lewis Hamilton into the pits. Him and Alfa’s Antonio Giovinazzi were the two cars that pitted during the closed pit entry. Netting them both a 10 second stop-go penalty that effectively put Hamilton out of the running of the podium places. That being said, the race really hotted up when Charles Leclerc had a massive collision with a tire barrier after losing control of his Ferrari not long after racing resumed, causing the race to be red-flagged and halted till the tire barrier can be repaired.

Thanks to all the teams pitting at the earliest possible moment the pit lane was open during the safety car period, the grid order was far from what one would expect on a normal race weekend. Hamilton was still in the lead at this point, not having served his penalty yet. However, right behind him on the standing restart on Lap 27 was Lance Stroll of Racing Point, Pierre Gasly of Alpha Tauri and Kimi Raikonnen of Alfa Romeo. It was however during this standing restart that saw the cards really turn in favour of Gasly as Stroll, although gaining an advantage by pitting during the red flag, fumbled the start and has allowed Gasly who had a blinder of a start to take second place right behind Hamilton. So when Hamilton peeled off to serve his stop-go penalty a few laps later, the French driver was effectively leading the race.

The race was still not plain sailing for the driver of the number 10 car however, as bearing down on him was Carlos Sainz in the McLaren just a few places behind him. To put it simply, the last few laps of the Italian GP was a race of attrition between these two drivers, with Sainz being as close as 1.2 seconds away from the tail of the Alpha Tauri and Gasly driving out of his skin to maintain track position. All his efforts paid off though when the chequered flag fell on lap 53, netting Gasly his first ever Formula 1 win, with Sainz and Stroll occupying the latter two podium positions.

This historic win is only the second ever victory for the Italian-based team, the previous one netted by a young Sebastian Vettel performing an equally upset victory at a rain-soaked Monza back in 2008. What more this victory meant that Le Marseillaise was once again heard on the Formula 1 podium, a national anthem that was last heard 24 years ago when Olivier Panis won the 1996 Monaco Grand Prix. A win here for Pierre might be considered lucky to some as it all hinged upon his well-timed pit stop. However, most fans of the sport agree that this win is well-deserved for him, especially considering the turbulent past 18 months he had to endure.

Over the past 18 months, the Frenchman has been promoted to Red Bull Racing, before being unceremoniously demoted mid-season for Alex Albon due to poor performance. His house was also broken into just recently, with many of his prized possessions and racing memorabilia stolen. Rejoining Alpha Tauri (formerly Toro Rosso) though was probably the best thing that happened to Gasly as with them he has since managed to secure a second-place finish in Brazil last year, out-dragging Hamilton in the Mercedes on the last straight, and has now secured his maiden Formula 1 win with the supposed B-team of Red Bull Racing. Historic win aside, this chaotic Italian Grand Prix is exactly what fans want to see in Formula 1. It was a race full of edge-of-your-seat excitement till the very last second, not the usual Ham-Bot-Ver podium places of a typical 2020 race result. To those who missed it, this race is certainly worth a rewatch, especially since we didn’t even have the time to cover Vettel’s brake failure incident and Hamilton’s excellent overtaking manoeuvres to get him back up to P7 by the end of the race.

To those who did catch it live though, here’s to hoping to see more of these kinds of races in the future. “This is amazing! I’m lost for words! It’s unbelievable! I’ve been through so many things in the past 18 months and it’s better than anything I expected. I focused hard when I re-joined Scuderia AlphaTauri. Day by day, race by race, we improved ourselves and got stronger and stronger – this team gave me my first podium in F1 last year in Brazil and today, these guys gave me my first win in Formula 1, in Italy, in Monza, with an Italian team. I’m not someone who gives up on anything, I always fought for everything in my life until I made it to F1. Today it was a great day! When I was fighting the last few laps to keep P1, I knew how gutted I would have been if I had lost it, I wouldn’t have been happy with P2. I gave it everything I had – it was difficult – I pushed hard at the start of the stint to not give anyone the slipstream behind, then the last five laps were so intense, I almost shunted 10 times… I was pushing so hard! My tyres were gone but I wanted that win so much, it still feels weird to say I’m an F1 race winner. A big thanks to all of these guys here at the track and at the factory, in Faenza and Bicester, it’s a great day for them too. Most of them are Italian and the HQ is in Faenza, Italy, so to win the Italian Grand Prix is amazing. Thank you all.” “It was a very eventful race. I’m very happy for Pierre, congratulations to him and to the team, it’s a great day for us. Looking at my race, P9 was the maximum we could achieve today with the timing of the safety car and the tyre choice we went for at the start of the race. Everything that could have gone wrong with the strategy, unfortunately did, but at least it was the opposite for Pierre. It was amazing for him to take the opportunity and I’m happy for him. I’m disappointed not to have had the same opportunity but I’m satisfied with my race, I’m honest with myself and I think I drove a good race.”

“What a Race! Pierre won the Grand Prix and Daniil finished P9. It’s an amazing result for us, such a fantastic team effort. On one side, we were lucky as Pierre pitted before the Safety Car, when Magnussen parked his car before the pitlane and the pit lane entry was closed for all the other cars; on the other side, after the red flag occurred due to Leclerc’s crash, we were able to make a good start and to keep all the other cars behind for 27 laps, showing great pace. Daniil’s race was different. He was following Pierre in the first stint showing good pace despite being on hard tyres, but unfortunately, the Safety Car and the closed pit entry didn’t help his strategy. After the red flag in the second part of the race, he was able to recover positions and get in the points finishing in P9. This is a great day for Scuderia AlphaTauri, and now we will go to Mugello, trying to develop the car further with the clear target to get more points in the bag.” 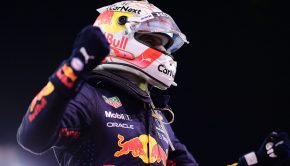