This new special edition Ranger Raptor brings with it a red paint job and a few other tech goodies.

For those who have always wanted a red Ranger Raptor, the only option was to have it painted (or wrapped) elsewhere as the factory colours available were only white, blue, grey or black. Happily however, this niche problem has now been solved as Sime Darby Auto ConneXion (SDAC), the sole distributor for Ford in Malaysia, has recently unveiled a new Ford Ranger Raptor X Special Edition that comes complete in a striking True Red exterior hue. Available exclusively in Malaysia, this special edition truck is a bit more than just a red Ranger Raptor with a few custom decals down its side. That is because there has also been some interior enhancements too on this X Special Edition Ford, which comes courtesy of a some custom carpet mats, a 360º surround view camera, as well as a dual channel Kenwood Digital Video Recorder. Aside from those aforementioned add-ons however, it is pretty much the same Ranger Raptor that has been available in Malaysia since 2018. Nevertheless it is still a rather potent truck with its 2.0 litre twin-turbocharged diesel four-cylinder that delivers its 213 PS and 500 Nm of torque to all four wheels through a 10-speed automatic transmission. Just to make this Baja basher a tad more civilised on the road too, the Ranger Raptor comes equipped with a full suite of active safety aids like Autonomous Emergency Braking (AEB) with Vehicle and Pedestrian Detection, Forward Collision Warning and Lane Departure Warning and Assist. SDAC has also recently introduced a 5-year/160,000 km warranty package for all new 2021 model year Rangers to provide additional peace of mind for owners of these Ford pickups. “With its Ford Performance DNA, Ranger Raptor is undoubtedly the ultimate and only performance pickup truck in Malaysia that has been perfected for everyday urban use in addition to commanding the harshest off-road terrains at thrilling speeds. With this Special Edition, we hope to inject excitement into our lineup of well-loved Ranger vehicles,” said Turse Zuhair, Head of Sales, Sime Darby Auto ConneXion.

The New Ford Ranger Raptor X Special Edition comes standard with a 360-degree camera. The technology combines several video cameras to provide real-time full coverage of the area surrounding the vehicle – be it in the urban setting or difficult off-road terrains.

It also features a dual channel Kenwood Digital Video Recorder (DVR) that offers a range of functions, including Quad high-definition (HD) recording, wide-angle viewing, night view recording, a built-in polarised filter and Mobile App connect via hotspot. Compatible with both Apple iOS and Android, it also comes with a 32GB memory card which will allow drivers to record their life’s adventures or as a safety feature.

Performance DNA through its veins

The Ranger Raptor which was introduced in Malaysia at the end of 2018 is Asia Pacific’s first and only factory-built high-speed off-road performance truck and is designed to thrill even the most hard-core extreme adventure enthusiast, straight off the line.

With the learnings from Ford’s F-150 Raptor, the Ranger Raptor’s unique chassis frame had been newly-developed and extensively modified for high speeds and endurance off-road. Its race-bred suspension has also been specifically crafted to tackle the toughest terrains, smoothing out jumps, bumps and ruts. No other production truck in Malaysia features the legendary FOX Racing Shox and a huge ultra-strength bash plate as standard equipment.

Its cutting-edge Terrain Management System offers six pre-set driving modes to conquer virtually any terrain, at the turn of a dial. Inspired by the Baja 1000 Desert Race, the famed Baja Mode dials down traction, improves responsiveness and shifting speed, and optimises the Ranger Raptor for high-speed off-roading.

As for its performance, the Raptor delivers 213 PS of power and 500Nm of torque and has been carefully calibrated with Ford’s latest 10-speed automatic transmission with PaddleShift technology.

Confidence to go all in

The New Ford Ranger Raptor X Special Edition is also packed with the latest smart and safety technologies offering customers complete confidence as they go about their adventures. 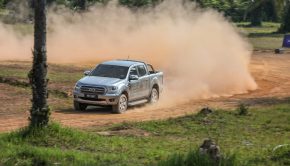