Another pair of racy Ducati superbikes are raring to hit the streets of Malaysia.

Next Bike Sdn. Bhd, the official Ducati distributor in Malaysia has just recently announced the arrival of the Ducati Streetfighter V4 and V4 S on our shores. 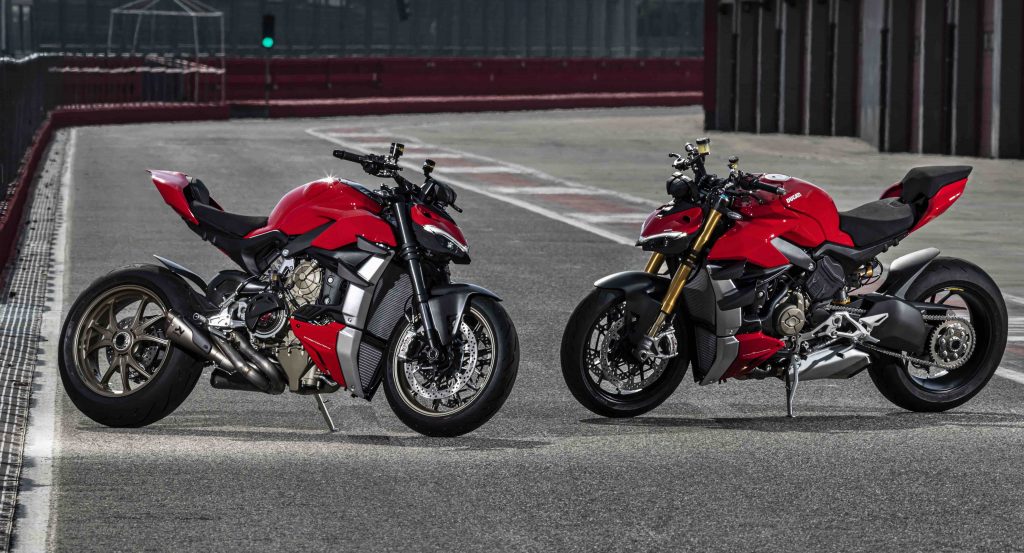 Essentially the naked version of Ducati’s red-hot Panigale V4 and V4 S super bikes, this new generation of Streetfighter V4 and V4S continues on the “Fight Formula” from the last generation that arrived back in 2013. A minimalist design it might be, but the overall aesthetic of the Streetfighter however is both aggressive to look at, and more importantly very technologically advanced.

From the front, minimalist full-LED headlights flanked by the V-Shaped DRLs are meant to recall riders to the face of its Panigale big brother, while, in Ducati’s own words, evoke the grin of DC comic book villain, the Joker. Other design flourishes meanwhile include the innovative dual-layer fairing that incorporates both the air-box and LED cooling intakes. Moving round the back, a rear deflector diverts air flow from directly impacting the tank. That said, the design highlight for the Streetfighter range would probably be the aerodynamic biplane wings. Designed in collaboration between the Ducati Corse specialists and the Ducati Style Centre, these twin wings on either side of the body boost stability during acceleration and braking, not to mention supposedly generate 28 kg of downforce at 270 km/h. Both variants bearing the Streetfighter name are powered by the 1,100 cc Desmosedici Stradale V4 engine that produces 208 hp at 12,750 rpm and 123 Nm of torque at 11,500 rpm. Thus, in combination with the 178 kg kerb weight translates to an impressive power to weight ratio of 1.17. Gear shifting responsibilities meanwhile fall to a 6-speed manual transmission with Ducati Quick Shift up/down EVO 2 functionality. Finishing off the Streetfighter package is a the latest generation of Ducati’s electronic package. Based on a 6-axis Inertial Measurement Unit (6D IMU), the bike instantly detects roll, yaw and pitch angles, and electronically assists in all areas during the ride. This system is put to full use on the Streetfighter V4 S especially, as only the S variant features the second-generation Öhlins Smart EC 2.0 system. Working in combination with the Marchesini forged wheels and Öhlins electrically controlled 43 mm NIX30 forks and TTX36 monoshock on the front and the rear of the V4 S, these electronics are said to ‘provide a more rider-friendly interface’. PRESS RELEASE: A Panigale V4 with stripped off fairings, a high and wide handlebar, 178 kg (dry weight) on the scale, powered by the 1100 cc Desmosedici Stradale delivering 208 hp, aerodynamically enhanced with biplane wings, and finished off with a complete electronics package. This is the “Fight Formula” that gives life to the Streetfighter V4. The result is a modern and technologically advanced naked bike with an aggressive and emotional design, which doesn’t hide its thrilling levels of performance. The Streetfighter V4 expresses its intentions perfectly with its minimalist full-LED headlights, recalling the front of the Panigale V4 while evoking the grin of the Joker (the comic strip character from which the designer of the new naked drew inspiration). Another clear Ducati hallmark is the V-shaped DRL already featured on the Panigale V4. Its compact headlights are embedded in a meticulously designed dual-layer fairing that incorporates the air-box and LED cooling intakes, while a rear deflector diverts airflow from impacting the tank directly. The bike’s elegant yet aggressive design is complete with a front cover that hides the fixings and wirings of the TFT display. The Streetfighter V4’s fast, agile mixed-road performance demands maximum stability at high speed and when braking, reduced wheel-up during acceleration and minimized electronic control of the suspension set-up. Thus, Ducati Corse specialists together with the Ducati Style Centre have developed aerodynamic biplane wings for the bike for optimum stability without compromising its performance. The latest-generation electronics package on the Streetfighter V4 is based on a 6-axis Inertial Measurement Unit (6D IMU) which instantly detects the bikes’ roll, yaw and pitch angles. The electronics oversee every part of the ride; some controls manage start, acceleration and braking, others handle traction, while some lend a helping hand in corners and out-of-corner stretches. Since the arrival of the last Streetfighter variant in 2013, the all-new Streetfighter V4 is ready to rumble as it makes its return with vigor.