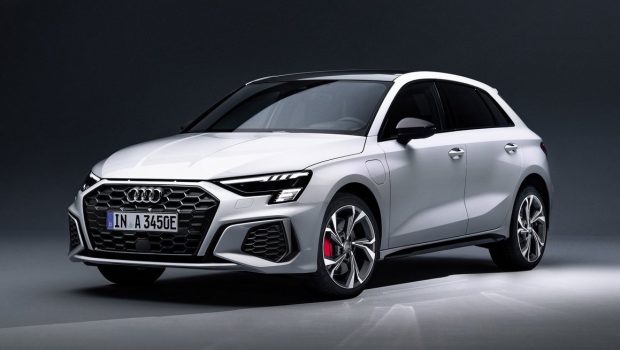 A sportier flavour of the Audi A3 PHEV hatchback has recently made its debut in Europe.

Audi has recently added yet another variant to its ever-expanding lineup of A3 hatchbacks, with the most recent addition being the Audi A3 Sportback 45 TFSI e. A sportier flavour of the existing plug-in hybrid Audi A3 Sportback 40 TFSI e, this new PHEV variant is essentially a VW Golf GTE with four rings on the nose. Powertrain hardware-wise, A3 45 TFSI e is exactly the same as it’s more sedate 40 brethren. On the combustion engine side, a 1.4 turbocharged four cylinder is mated to a 6-speed S tronic dual clutch transmission that drives the front wheels. Providing the electric part of this hybrid powertrain meanwhile is a permanent synchronous motor integrated within the gearbox housing, and is fed by a 13 kWh lithium-ion battery pack consisting of 96 prismatic cells. More interestingly however regarding the figures of this sportier Audi is the fact that fuel economy and emissions hasn’t seem to have taken too big a hit this increase in performance. Its claimed fuel economy figures are still the same as that of the more sedate PHEV trim level, at 1.4 to 1.5 liters per 100 km on the NEDC testing cycle. On the emissions front, this 45 TFSI e is only 1 g/km worse than the 40, with a claimed CO2 emissions figure of 31 to 34 grams of CO2 per km. Then again, all electric range is slightly compromised over the 40 e due to the added performance on the 45 e. Thus managing only 74 km of all electric drive on a full charge according to the NEDC cycle, rather than 78 km of the 40 e variant.

Range aside though, all the other prerequisite electric drive features of the 40 is standard too on the sportier 45. These include the four hybrid driving modes: Auto Hold, Battery Hold, Battery Charge and an all-electric mode. The last of which being the mode this electrified Audi will always start up with.

Speaking of features, there are some performance add-ons worth highlighting on this sportier PHEV A3. Most notably are its larger brakes that are hidden behind the 17 inch alloy wheels. Measuring in at 340 mm and 310 mm in diameter on the front and rear respectively, and complete with red brake callipers, it serves not only provide additional stopping power to reign in the added oomph under the hood, but also as clear visual cue that this is no ordinary PHEV hatchback.

To further distinguish this 45 from the plain Jane 40, this sportier variant also comes standard with Audi’s black styling package and a Singleframe hexagonal grille with gloss black inlays that complement the LED headlights and taillights. Standard too on this premium spec Audi over the lower tier PHEV variant is Audi drive select, sport seats, tinted windows, dual-zone automatic air conditioning, and the keyless go. As for the chances of it arriving in Malaysia however, seeing as the normal Audi A3 has yet to make an appearance here, the chances of this sporty hybrid variant officially being launched locally is sadly slim to none. PRESS RELEASE: Audi continues its electrification campaign in the compact class: Presales of the A3 Sportback 45 TFSI e will start in Germany this week. The brand with the four rings is thereby complementing the A3 Sportback 40 TFSI e with a sporty model that has more power and more extensive equipment. Its plug-in hybrid drive has a system output of 180 kW (245 PS) and 400 Nm (295.0 lb-ft) of system torque.

Control software generates the extra 30 kW (41 PS) of system output and 50 Nm (36.9 lb-ft) of torque as compared to the A3 40 TFSI e. It regulates the optimum interplay between the two drives under maximum power requirements. The electric motor complements the combustion engine in the corresponding engine speed ranges. The electric motor is integrated into the housing of the six-speed S tronic, which transfers the power to the front wheels. A package consisting of 96 prismatic cells in the lithium-ion battery stores 13.0 kWh of energy. The A3 Sportback 45 TFSI e charges with a maximum of 2.9 kW. An empty battery can be recharged in around five hours from a conventional domestic power socket. In “Auto Hybrid” mode, which is the main operating mode, the combustion engine and the electric motor divide the work intelligently. Depending on the situation and the driver’s preference, the car can coast, recuperate – in overrun mode and while braking – or boost together with the electric motor and TFSI.

When the driver selects the “Battery hold” or “Battery charge” modes, the hybrid management maintains the state of charge of the battery at a constant level or increases it in a targeted manner. Drivers can prioritize electric drive with the EV button. The driver controls further functions via the central MMI display, the six-speed S tronic, or the Audi drive select dynamic handling system. Special displays inform the driver about the drive’s activity: For example, the digital instrument cluster displays, the engine output, the drive mode, the battery’s state of charge, and the range. The MMI display also provides visualizations of the energy flows.

The exterior of the Audi A3 Sportback 45 TFSI e features an expressive design: The black styling package and a Singleframe grille with high-gloss black inlays emphasize the car’s sporty character. Upon request, Audi offers the Matrix LED headlights with non-blinding high beams and dynamic cornering lights. Their digital daytime running lights, a pixel array consisting of 15 LED segments, generate an E-shaped light signature – the symbol of the plug-in hybrid drive. The brake disks behind the 17-inch wheels are larger than those of the 40 TFSI e: They have a diameter of 340 millimeters (13.4 in) at the front and 310 millimeters (12.2 in) at the rear. All brake calipers are painted red. Unlike the 40 TFSI e, the standard equipment also includes Audi drive select, sport seats, tinted windows, two-zone automatic air conditioning, and the convenience key.