Aston Martin celebrates new era of performance with its most powerful lineup ever at Festival of Speed. The British manufacturer will be a starring attraction of the four-day event on 23-26 June, which spreads across the beautiful Goodwood Estate in the South Downs, UK.

The new V12 Vantage, which was launched earlier this year, is the final Vantage to receive the company’s largest and most potent series production engine. It is powered by 5.2L V12 Twin Turbo engine which outputs 700PS and 753Nm of torque. It debuted with 333 total units which all sold out before launch. It will be making its UK public debut on the Goodwill Hillclimb on Thursday. Goodwood is world-famous for its fast and notoriously tricky hill climb, which makes the dynamic element of the event such a thrill. Following on from a successful global media launch in Sardinia in March and the first customer cars rolling off the line at St Athan last month, the critically acclaimed  DBX707 will too make its UK public dynamic debut in the ‘First Glance’ batch over the weekend.

The DBX707, which Aston Martin calls ‘the world’s fastest and most powerful ultra-luxury SUV’ will also showcase several Q by Aston Martin finishes that are available to order through the marque’s bespoke service.

It includes the 2022 Aston Martin Racing Green paint – seen on the Aramco Cognizant Formula One™ Team’s car, Q design graphics and a set of lime green brake calipers. It has an AMG-sourced 4L twin-turbocharged V8 that delivers 707PS and 900Nm of torque. This is 157PS and 200Nm stronger than the standard DBX. Powered by an almighty, naturally aspirated 6.5-litre V12 engine producing 1160bhp, the Festival of Speed couldn’t go without an appearance from the ultimate hypercar, Aston Martin Valkyrie. The sound of its masterful engine commanded huge crowds in the supercar paddock last year. With customer deliveries now underway, Aston Martin’s groundbreaking hypercar returns to take on the hillclimb once more, this year piloted by WEC racer Peter Dumbreck; an ex-Aston Martin Racing factory driver with no less than 15 Nürburgring 24 Hours races under his belt.

The recently debuted Vantage F1 Edition will also be taking on the hill. It is motivated by the marque’s return to Formula 1 after a long hiatus. This will be joined by the V12 Speedster in the classic DBR1 livery – one of only 88 built, along with the beautiful but british DBS, and the DB11. Powered by the AMG-sourced 4.0-litre twin-turbo V8 has a maximum output of 535PS and 685Nm of torque making it the most powerful Vantage to date.

The beautifully restored Aston Martin Bulldog, which is still gearing up for its first-ever 200mph attempt, also makes an appearance at Goodwood this year following a two-year restoration programme which saw the Bulldog painstakingly stripped and reassembled into its former, iconic glory.

Aston Martin also proudly celebrates the centenary of its maiden Grand Prix entry in 2022. One hundred years on from the 1922 French Grand Prix, TT1 “Green Pea” will once again, take up its position on the start-line at the Festival of Speed.  Borne from the desire of Aston Martin founders – Lionel Martin and Robert Bamford – to produce a Grand Prix racing car, the 1922 TT1 Green Pea set in motion an enduring love of the sport for Aston Martin. This special car will also be joined by the stunning LM4, which raced successfully in the 1930s and still races today in Historic events often in the hands of Aston Martin factory driver, Darren Turner. 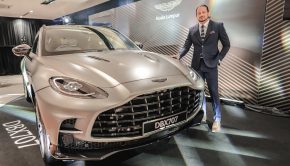