Have you heard of Abarth?

Abarth is a brand belonging to the FCA Group. Although it has a brand status, we could consider it as the official FIAT tuning company. Although Abarth is fully integrated into FIAT’s business model since 1971, in 2007 it was re-founded as a manufacturer with its own and independent status within the FCA Group.

Since then it has produced high performance and racing versions of the FIAT 500 and FIAT 124 Spider, as well as the FIAT Punto. There is parallelism in company strategy with Cupra, which in 2018 has become independent from SEAT, although its cars are based on production SEAT.

Abarth was founded by Karl Abarth in the distant year 1949. Abarth was of Austrian origin, but he emigrated to Italy after the Second World War, where he met Tazio Nuvolari through a common friend: Ferry Porsche. After founding Cisitalia – of very short but intense existence – he founded Abarth & C. in the Italian town of Bologna, together with one of the pilots of Cisitalia. Abarth started manufacturing accessories and high performance parts for FIAT, Lancia or Simca vehicles. After moving to Turin, Abarth began an almost exclusive relationship with FIAT, which has lasted to this day. 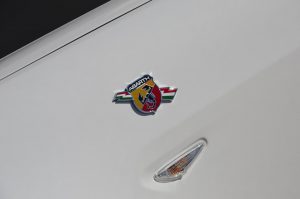 His first car was the Abarth 1500 Biposto, a nice experimental coupe designed by Bertone. After various preparations based on vehicles of FIAT origin – cars like the FIAT 600, without going any further – Abarth set several speed records with fully-fitted prototypes. Abarth made his name in the world of racing, doubling the power of small FIAT, real matagigantes in the right hands. The impressive trajectory of Abarth motivated FIAT to its complete acquisition in the year 1971. Under FIAT, Abarth became its arm dedicated exclusively to motorsport.

Directed by the engineer Aurelio Lampredi , Abarth started a successful rally program, in which the FIAT 131 Abarth and FIAT 124 Abarth Rally had outstanding positions. At the end of the 70 Abarth was merged with Squadra Corse Lancia, and in 1981, integrated in FIAT Auto Gestione Sportiva. Abarth then suffered a clear decline, limited to little more than the surname in high performance models or sports finishes within models of the FIAT Group. In 2007, Abarth was re-launched as an independent company, included in the business consortium led by FIAT.

The Abarth We Malaysians Loved

Following successful sales of the Fiat 124 in the early 70s, Fiat began working on its successor, the 131. In 1974, they introduced the 131 to the public at the 55th Turin Motor Show. Following the release of the standard 131 model and in cooperation with Bertone and Abarth, Fiat began working on the 131 Abarth Stradale for use in competition. To qualify for Group 4, manufacturers were required to produce a minimum of 400 units of the specific model they would be campaigning. In turn, the 2 door version of 131’s began their life in the Fiat factory alongside the other standard production models; however, once the primary chassis was completed, they were pulled from the production line and sent to Gruppo Bertone for bodywork.

By 1970’s standards, the 131 Abarth was the pinnacle of sports cars; even taking down the more stylish Lancia Stratos that had dominated the rally stages since the early 70’s. The success of the 131 was largely attributed to the Abarth designed mechanics and advanced suspension. The engine fitted to the Abarth was an inline 4 cylinder, 2.0 liter that featured four valves per cylinder and a single Weber carburetor.