Things look to be on the up and up for Volvo following a tough start to the year.

Volvo looks to be on a roll again in terms of sales this year, as the sales figures for November 2020  shows yet another month of positive commercial growth for the Scandinavian automaker.

Selling 66,579 cars in the 11th month of the year, this healthy November sales figure represents a 6.4% increase from the same time last year, where the Swedish car company only sold 62,550 cars over the same 30 days in 2019. According to the automaker, the strong sales last month were ‘driven by a strong performance in China and in the US, where losses from earlier COVID-19 shut downs were fully recovered’. This is evidenced by the fact that in both the US and China, sales of Volvo grew by a staggering 20.3% and 24.3% respectively over 2019 numbers in November. 11,590 cars where shifted in the US in November, while an all-time monthly high of 18,032 cars left Chinese Volvo dealerships last month.

Having said that, Volvo sales in Europe remain on a downward trend. November saw a 10.8% decline in sales, with only 26,094 units sold over the entire region. Then again, this could possibly be attributed to more and more European nations entering various stages of lockdown last month than any long-term underlying problem with commercial operations in its home continent. Europe aside, Volvo still did relatively well commercially in other parts of the world. Posting a monthly combined sales figure of 10,863 in these other markets, it represents a not-insignificant increase of 18.7% over the numbers posted the year prior.

Much like in October 2020, the Volvo SUV lineup continues to be the biggest contributor to sales for the automaker in November this year, accounting for 73.4% of sales. The Volvo XC60 mid-sized remains the top of the sales chart last month, with the XC40 compact SUV and the XC90 large SUV following closely behind in second and third place respectively.

Then again, both of Volvo’s larger SUVs have slipped in the number sold over the year to date when compared to the figures of last year. Thereby indicating the larger impact in regards to sales induced by the pandemic earlier in the year. It is not all bad news however for the Swedish automaker when it comes time to look at this wider commercial picture in 2020, as sales of its XC40 have jumped by more than 30% to date this year. Over 161,329 of these small Volvo SUVs have been sold thus far in 2020, compared to only 123,403 of the same model sold in the same period last year.

In other news gleaned from this breakdown, the share of the electrified Recharge models in Volvo’s lineup has more than doubled over the last 11 months of the year. These low to zero tailpipe emission cars now make up about 16.4% of sales by the Scandinavian car company, with more than every 1 in 4 Volvo Cars sold in Europe this year to date being a Recharge model. PRESS RELEASE: Volvo Cars global sales continued to grow in November, with volumes up 6.4 per cent compared with the same period last year. The sales increase was driven by a strong performance in China and in the US, where losses from earlier COVID-19 shut downs were fully recovered.

The company sold 66,579 cars during the month and the volume growth was driven by a continued strong demand for Volvo Cars’ award-winning SUV range.

The share of Recharge models, with a fully electric or plug-in hybrid powertrain, more than doubled in the first eleven months, compared with the same period last year, and now make up 16.4 per cent of global sales. In Europe, the share was 27.8 per cent the same period.

In the first eleven months, Volvo Cars sold 582,997 cars, down 7.6 per cent compared with the same period last year.

In China, sales reached an all time high 18,032 cars, up 24.3 per cent compared with November last year. In the first eleven months of the year, sales grew by 7.2 per cent, compared with the same period last year.

Volvo Cars’ sales in Europe reached 26,094 cars in November, down 10.8 per cent versus the same month last year. In the the first eleven months of the year, sales declined by 17.0 per cent year-on-year.

In November, the XC60 mid-size SUV was the top selling model for Volvo Cars, followed by the XC40 compact SUV and the XC90 large SUV. During the month, SUVs accounted for 73.4 per cent of the company’s total sales, up from 68.0 per cent in same month last year. 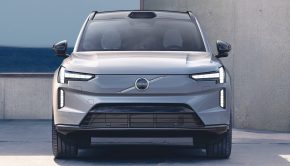