The Renault Koleos over here gets adds a few fancy features for 2021.  TC Euro Cars, the official distributor of A new MHEV diesel is also available with the updated CLS, as is a limited-edition CLS 53 AMG model.  Mercedes-Benz 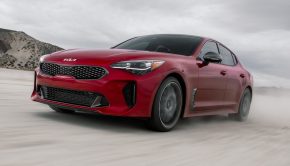 A meaner-looking Scorpion special edition model of the Kia Stinger is set to be released soon too.  Despite its critical The updated Volvo XC60 adds a Google infotainment system and even more safety tech.  Volvo has recently introduced a raft Will this updated compact Citroen crossover make its way over here?  Unbeknownst to many over here, the Citroen C3 Aircross The mildly refreshed Innova is now available in all Toyota dealerships nationwide.  Much like when the Innova’s order books were A mildly revised Fortuner is officially available for purchase at Toyota dealerships nationwide.  Nearly a full month after announcing that These new million-ringgit Lexus luxury sedans will arrive in Malaysia sometime in May 2021.  Nearly a year after its official The ever-popular OG MINI models have received a mild update yet again for 2021.  To those who had just bought