A shooting brake Mazda RX-7 does look a lot like the clown-shoe BMW Z3 M, especially in blue.

There is perhaps near unanimous consent among the automotive enthusiast community that the FD RX-7 is one good looking car. In fact, there are maybe even some that might say that this curvy coupe’s timeless design makes it one of the best designs that Mazda has ever created. It could be said therefore that any attempt to mess with this sleek silhouette of this haloed 90s JDM sports car is perhaps misguided to say the least. A fact since confirmed by the countless number of tacky aftermarket bodykit that has ruined the clean lines of many a RX-7.

Having said that, of all the exterior add-ons that would be likely to spoil the looks of the cool coupe, interestingly enough, tacking on a long-roofed rear end to this Mazda doesn’t seem to be one of them. That is because this render here of an FD RX-7 shooting brake actually looks surprisingly good. Rendered by Khyzyl Saleem (@the_kyza on Instagram), this particular RX-7 concept naturally features an extended roof that reaches all the way to the back for that signature shooting brake profile. Looking at it from the side though, this Mazda here is perhaps more reminiscent to that of the BMW Z3 M ‘clown-shoe’ hatchback. The resemblance to the German cult classic is further emphasised thanks to the addition of twin rear quarter windows on those thick C-pillars. On the topic of windows though, unlike a typical shooting brake where the glass is flush with the ends of the C-pillar, a closer look reveals that the rear glass of this shooting brake RX-7 is actually inset rather far into the body.

So it does strangely mean that there might not be any more added practicality to be afforded with this shooting brake Mazda as compared to its coupe counterpart after all. Then again though, this recessed rear glass does do a good job at further accentuating the shooting brake style of this RX-7. Now being a JDM sports car of course, even in render form this RX-7 shooting brake is still rocking some aftermarket mods. Most notably being the deep dish highly chromed multi-spoke alloy wheels sitting snuggly within the arches of this lowered coupe.

Down the side of this rendered RX-7 too are subtle black side skirts, complementing the equally subtle front splitter and rear diffuser. What is perhaps not so subtle however is the massive fart can of an exhaust sticking out the back of this Montego blue Mazda.

Add to that the fact that behind the nose of this RX-7 is a literal wall of radiators and intercoolers, as well as the inclusion of a roll cage as well as racing seats with racing harnesses within the cabin of this Mazda, it is therefore perhaps safe to assume that the legendary twin-turbocharged twin-rotor 13b engine has definitely been tickled somewhat. That is all of course going by the assumption that this RX-7 exists in real life. Sadly however, for now at least, it exists just as a render in the virtual world.

Nevertheless, for those who have since been enamoured with the idea of a shooting brake RX-7 idea, such a thing actually does exist in the real life, with the Greddy Aftermarket Hatch conversion that is seen on this mad, bad modified Mazda down below being the most famous example. And before you ask, yes there are also a couple of examples out there that do without the interesting-looking widebody conversion. 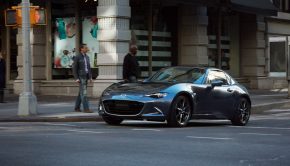