Maserati MC20 Is China Performance Car Of The Year 2021

High praise for the Maserati MC20, that hasn’t actually officially arrived yet.

Maserati’s latest MC20 supercar has recently walked away with the prestigious China Performance Car Of The Year 2021 Award, which was recently announced at the Guangzhou Auto Show. A welcome surprise then for a car that has yet to actually officially be on sale anywhere in the world. Having recently been unveiled in September with no actual production MC20s hitting the road yet, the only possible rationale to have presented this car with this award (that is incidentally dated for next year, 2021) in good faith is that while the rest of the world were salivating over this V6 mid-engined Italian supercar, Maserati has arranged for a pre-production model to be tested by the the China Car of the Year 2021 jury, which comprised of 41 ‘authoritative judges from the automotive media’. Otherwise, this award being presented to this car does raise some questions regarding its assessment process. On this subject, Maserati has claimed that this win in China’s ‘fairest and most authoritative annual car award’ was based on ‘overall and market performance, as well as other key factors of the candidate models’. Then again, seeing as no one has actually publicly driven the car and that the fact it has yet to hit the showrooms anywhere in the world, it stands to reason then the first two points on the judging criteria, regarding overall and market performance, has thus already been soundly debunked. This is not to say however that the Maserati MC20 is not a pretty interesting supercar that is to launch in 2021. Supposedly the big bang that marks a new chapter in the continuing story of this legendary Italian marque, the all-new and technically advanced 620 hp Nettuno V6 powertrain that debuts in this mid-engined supercar is already worthy of much praise in itself. Not to mention the equally innovative design and potential for electrification. Nevertheless, prematurely giving an award to a car that hasn’t even been launched is a weird publicity stunt to say the least. Not only does it cheapen the award, but it sort of cheapens the achievements of what looks to be a very good car too. Something we will probably only find out for sure when it actually launches properly sometime in the near future. PRESS RELEASE: The highly anticipated China Car of the Year 2021 awards were officially announced yesterday in Guangzhou. Closely followed by both industry insiders and consumers, the awards aim to promote the continuous improvement of China’s automotive industry and market. The China Car of the Year 2021 awards were selected by a jury composed of 41 authoritative judges from the automotive media. Based on overall and market performance, as well as other key factors of the candidate models, Maserati’s super sports car MC20 was named as the China Performance Car of the Year 2021.

Developed by the Maserati Innovation Lab and produced at the historic plant in Modena, MC20 is 100% made in Italy. Its superb looks conceal an uncompromisingly sporty soul, with the new 630 horsepower V6 Nettuno engine that delivers 0-100 km/h acceleration in under 2.9 seconds and a top speed over 325 km/h. The patented engine has been developed, designed and built entirely in-house and uses a pre-chamber technology derived from Formula 1 engines. 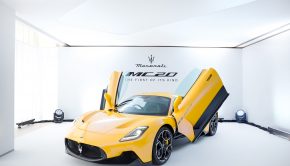