Morgan shows that removing one wheel doesn’t make a car any less fun.

Welcome back to another instalment of left-field cars that are worthy of an AP, and it surely doesn’t come more left-field than the Morgan 3-Wheeler does it?

Looking more like a WW1 fighter plane that accidentally had its wings clipped off than any other ‘normal’ car on the road, the Morgan 3-Wheeler will certainly be consistently attracting a crowd wherever it goes. And to those within a kilometre radius that have perhaps not noticed that a trike is within their vicinity, the barely-silenced burble emanating from the S&S V-twin up front would promptly be alerting them to its presence. With a 5-speed Mazda-sourced manual transmission and a kerb weight of just over 500 kg too, the 3-Wheeler is far from being all show and no go. The century sprint for instance is dispensed in just 6 seconds, and since there isn’t any semblance of a roof — or even doors and windscreen for that matter — the visceral experience will probably trick you into feeling as if you’re going way quicker than you actually are.

What more too is that, as Richard Hammond has proved on TV, it is actually possible to light up the (singular) rear tyre and make this Morgan dance. Though since you’re essentially sitting on it rather than in it, donning a helmet and even some body protection is advisable before performing any heroics. An utterly bonkers bit of British barminess it may be, but there is evidently enough interest in the thrill provided by this trike for 3-Wheeler to currently be Morgan’s best-selling model to date. Over 2,500 units of this trike has been produced since its debut in a decade ago, and demand for it is still strong enough that used examples still consistently trade for close to its original base price of £30,000+ (RM 160,000).

In fact, the love of the 3-Wheeler is so great that Morgan have already launched a successor in the form of the Super 3. Still three wheels but with a Ford three-pot this time, one of these slightly more stylish and civilised models could be yours brand new in the UK from £45,000+ (RM 240,000). 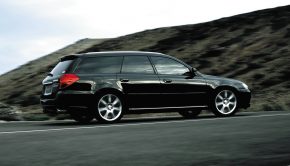