This second generation X4 places a far greater emphasis on sportiness and expressive design. Have a look at the extravagantly styled and dynamically stretched lines of the exterior, and the premium feel in the interior.

Approximately 200,000 units of the first-generation X4 have been sold around the world since the original model was launched in 2014. Now comes an all-new BMW X4 with significantly enhanced driving dynamics, a standout exterior design accentuating the car’s sporting instincts, a further refined premium ambience in the interior, state-of-the-art driver assistance systems and leading-edge connectivity technologies. We take this latest version of the X4 for a weekend of fun and some serious evaluation. We also find out why BMW keeps using the term “Sports Activity Coupe” and not Crossover when calling this X4 and its larger sibling, the X6.

The exterior design of this 2nd generation local assembled BMW X4 presents muscular dynamics and a commanding presence, however, its not to everyone’s palatte. Clean surfacing and high-class, modern accents headline this updated interpretation of the unmistakable X4 coupe profile.

An increase of 81 millimetres in exterior length to 4,752 millimetres, 54 millimetres added to the wheelbase (now 2,864 millimetres), an extra 37 millimetres of width (1,918 millimetres) and a 3-millimetre drop in height (to 1,621 millimetres) lend this all-new BMW X4 dynamically stretched proportions. Short overhangs and powerfully formed, subtly hexagonal wheel arches emphasize the perfectly balanced 50:50 distribution of weight between the front and rear axle. In the centre of the striking front end stands a large BMW kidney grille in three-dimensional look. Twin headlight units with dynamic contours and horizontal fog-lamps integrated into the outer air intakes form a new interpretation of the familiar six-eyed face espoused by BMW X models. All of the light functions feature LED technology as standard.

The precise shoulder-line, which takes in the door openers en route to the rear lights – and the character line between the wheel arches break up the surfaces of the car’s flanks. This creates clearly defined haunches, which are additionally emphasized by the drawn-in glasshouse at the rear. The coupe-style roofline slides into the rear window with an elegant flourish before dipping down more steeply to the rear. The window graphic also underlines the dynamic proportions of the all-new BMW X4, thanks to a smoothly rising sill line and an elongated take on the Hofmeister kink “counter-swing” at the base of the C-pillars.

Clearly structured surfaces and horizontal lines shape the car’s tail. The LED rear lights, with their three-dimensional shaping, are slim in design and positioned at the extreme edges of the rear. Together with the twin exhaust tailpipes they magnify the width of the rear end.

Awaiting the driver and passengers inside the all-new BMW X4 is a cabin with a modern, premium feel, whose strikingly dynamic styling also exudes an air of high-class elegance. All the controls are clearly arranged and set within trim finishers featuring a distinctly pared-down design. The low instrument panel and the slightly raised seating position typical of BMW X models afford drivers a superb view of what’s happening on the road ahead. The driver-focused layout of the cockpit helps to create an assured and sporty driving experience. Redesigned sports seats with boldly contoured side bolsters provide lateral support even in quick driving situations. Quality materials, precise build quality and a host of meticulously crafted details set the tone for the modern and individual premium character of the all-new BMW X4. The surfaces of the instrument panel and door paneling merge smoothly into one another, while the X logos embossed into the electroplated surfaces of the front and rear doors are eye-catching details. The ambient lighting mood can be adjusted as the driver pleases thanks to a choice of six colours.

With its output of 252hp, the engine in the all-new BMW X4 delivers good driving pleasure. Its maximum torque has been increased to 350Nm between 1,450 and 4,800 rpm, helping this new BMW X4 to power from 0 to 100 km/h in 6.3 seconds. Remember, this is a premium Crossover or as BMW likes to call it “Sports Activity Coupe” and not a sports sedan like the 5 or 3 Series.

BMW EfficientLightweight measures include a further increase in the proportion of aluminium as well as high-strength and ultra-high-strength grades of steel. This has made the body structure more solid than ever, serving up benefits for both vehicle agility and occupant protection. At the same time, the all-new BMW X4 weighs up to 50 kilograms less than its predecessor. The car has a significantly lower centre of gravity than the new BMW X3, and this enhances the Sports Activity Coupe’s cornering dynamics in particular. Driving in the city

Within the 1st hour of the test drive we were convinced that the X6 DNA had been infused into this smaller sibling. With the new BMW X4 the engineers have succeeded in achieving both outstanding handling properties and good agility. The overall character of the suspension has been tuned for directional stability and long-distance comfort which is the key ingredient for any sports Crossover. Also, this X4 is also equipped with Variable Sport Steering which is featured as standard to further adapt the steering angle of the front wheels to the driving situation. This allows easier maneuvering as well as more agility in bends for greater safety at high speeds. It is Crossover perfect for both sexes, better the younger generation as its carries the look that older drivers might find a little too funky. This is why BMW has the X5 and X3. The buyer of this X4 is more adventurous and is not looking for all out speed or on the edge driving dynamics. It is statement of success. The driver instrument cluster is a digital 12.3-inch unit, while the 10.25-inch freestanding control display is the Navigation System Professional that can be operated via voice, touch, gesture or iDrive controller. The unit also comes with Apple CarPlay support. Sound comes from a 16-speaker Harman Kardon surround system. Look up and the panoramic glass roof opens the spaciousness for all passengers.

This X4 pricing starts at a point where not many Malaysians will be able to enjoy its drive ability and on road enthusiasm. Please take note that the latest BMW X6 is priced at RM730k which is almost double of this X4’s pricing. The competition has the edge in terms of pricing and even in some aspect packaging. However, there will still be a number of lucky Malaysians with the available funds to have this X4 registered in their name and they will see its ability to deliver beyond the ruling segment Crossovers. 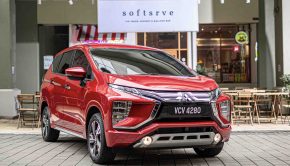