The many reasons as to why the Hilux is still the de-facto pickup choice in Malaysia.  When searching for something 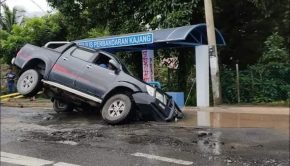 Even pickups like this Hilux here are not safe from the terrible state of Malaysian roads.  News just reached us The locally-assembled Toyota Fortuner gets a mild nip-and-tuck for the year ahead.  Following on from the local launch of the Toyota has given its legendary pickup a mild refresh.  Malaysia’s best selling pickup truck has just been given a mild