The ever-popular Sepang Drag Battle series that first debuted in

2003 will not be taking place this year. The national championship, which is the only drag race

held at a racing circuit and sanctioned by the Automobile Association of Malaysia (AAM), has

been removed from Sepang International Circuit (SIC)’s 2016 calendar, as SIC has stopped

drag races on the newly resurfaced track for safety reasons.

Dato’ Razlan Razali, Chief Executive Officer of SIC said, “We have had to take the race, which

has a good following, off the 2016 calendar with immediate effect as we cannot afford to

damage the newly resurfaced track.” The resurfacing and upgrading exercise, which cost close

He added, “The decision was made based on advice from Italian track consultant Dromo, which

led the upgrading works. The new track composition is not conducive for high impact events

such as drag races, and we do not want to endanger track users.”

characteristics that are totally different, more specifically concrete covered with a special type of

He added, “It is a wise decision by SIC to protect their assets to ensure safety at the highest

level, and to avoid activities such as drag racing, which could potentially damage the new

asphalt. Based on our inspection of the track prior to the resurfacing works, we recognised

several oil spills on the track, as a result of drag races, and this would cause severe damage if

drag racing were to be continued on the newly upgraded track.”

In view of this decision, SIC is studying the possibility of building a new track specialised for

drag racing within the circuit grounds, in collaboration with the Ministry of Youth and Sports

Malaysia. Dato’ Razlan shared, “SIC has always prioritised the safety of our riders and drivers.

We have contended that racing should be kept off our highways and byways, but we also

understand the need for speed. Therefore, just as we have carefully upgraded the current track

to meet stringent FIA and FIM international standards, we are looking to provide a purpose-built

facility for drag participants to race in.”

The proposed drag circuit is among efforts by the Ministry of Youth and Sports Malaysia,

together with SIC, to promote and support motorsport development in a safe and controlled

environment. A spokesperson from the Ministry of Youth and Sports Malaysia said, “In view of

this, the Ministry of Youth and Sports Malaysia is in support of drag race enthusiasts having an

outlet that is safe and specially catered for this sport. We subscribe to the need for a race circuit

that meets the requirements of a drag race track and the highest measures of safety.”

SIC will not be taking any bookings for drag races until further notice. “We hope that our drag

racing clients will be patient while we look into the possibilities of a specialised drag racing track.

We understand their frustration, but we believe such a track needs to be well thought through

The refreshed SIC track was reopened on 8 May 2016 after a close to three-month closure, and

major motorsports event to be held on the fresh track. 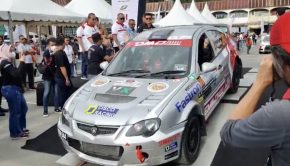