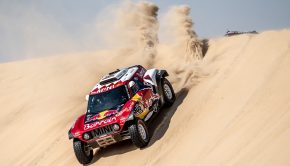 Nasser Al-Attiyah (Qatar) takes his win with a Toyota Hilux, after 7,586 of hard driven kilometers through Saudi Arabia, which Have you heard of Legend Race Cars? Well this was also new news for us and we have just been The Holden of Erebus Motorsports crashed heavily its second practice run yesterday.  The driver, Luke Youlden was taken to the