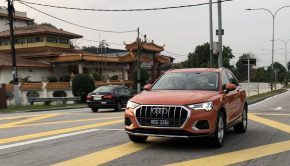 As anyone with a drop of petrol in their veins will tell you, Italy has the best scenery in Europe